Harbhajan Singh has asked for Kuldeep Yadav to lead India’s spin attack in the upcoming two-match Test series against West Indies that starts on Thursday.

Speaking to the Times of India, Harbhajan backed Kuldeep’s wicket-taking abilities despite the 24-year-old having played just six Test matches.

“On current form, my No. 1 spinner will surely be Kuldeep for the way he takes the ball away from the left-handers and his wicket-taking abilities. Ravindra Jadeja, too, has made most of his chances in Tests. Probably the only thing working in [R] Ashwin’s favour is his superb record against West Indies.”

Over the years, Ravichandran Ashwin has been the preferred spinner for India in home and away tours. He missed the last two Tests in Australia in December-January on account of fitness, and when Kuldeep got his chance in the last match in Sydney he took five wickets in Ashwin’s absence.

Kuldeep’s bowling at the SCG earned the praise of India’s head coach Ravi Shastri, who announced him as India’s number one spinner in overseas Tests. Not long after, the BCCI’s chief selector MSK Prasad contradicted Shastri and backed Ashwin as India’s lead spinner.

The signs from the Caribbean are that Kuldeep could pip Ashwin to get a place in the playing XI for the first Test starting August 22. In the ongoing practice match between India and West Indies A, Ashwin has not bowled a ball yet whereas Kuldeep impressed on day two with three wickets in 9.1 overs to help bowl out the home side on 181.

Ashwin, with 17 wickets and 235 runs inclusive of two centuries – was Man of the Series on India’s previous tour to the West Indies in 2016. 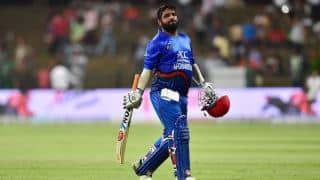