This Day, That Year: American President Eisenhower Attends a Test Match in Pakistan

This Day, That Year: American President Eisenhower Attends a Test Match in Pakistan

The Pakistan Cricket Board took to Twitter and recalled the special occasion from history.

On this day in 1959, America’s then-President Eisenhower came to Karachi to watch live Test match between Australia and Pakistan. Eisenhower is the only American President to watch a Test Match live in Pakistan. He witnessed a single day of the Test match where Pakistan scored 104-5 in front of him.

PCB took to Twitter and recalled the special occasion as it tweeted “#OnThisDay in 1959, at Karachi, the only American President to watch a Test Match live in Pakistan. President Eisenhower came to see Pakistan score 104-5 against Australia.”

It was the third Test match of the series between the two nations as Pakistan won the toss and elected to bat first. Opener Imtiaz Ahmed failed to score big and was dismissed by Davidson on just 18.

While Hanif Mohammad and Saeed Ahmed shared a crucial 88-run stand for the second wicket. Hanif scored 51 runs while Saeed missed his century was dismissed on 91. Ijaz Butt also played a crucial knock off 58 as Pakistan posted 287 on the scoreboard in first innings.

Pakistan’s Fazal Mahmood shone with the ball and claimed a five-wicket haul to restrict Australia’s innings on just 257. Neil Harvey was the highest scorer for Australia with 54 runs.

In the second innings of Pakistan, Hanif Mohammad was the opener in first innings, came out to bat at no. 4 and slammed an unbeaten century. The right-handed batsman remained not-out and guided Pakistan to 194/8. Earlier, in the same year, Hanif slammed an unbeaten 499 in the domestic cricket match for Karachi against Bahawalpur, to script history.

Chasing a target of 225, Australia managed to draw the game by posting 83/2 in the 32 overs on the last day of the Test.

On This Day In 2011: Virender Sehwag Became Second Player To Score Double Century In Men's ODIs 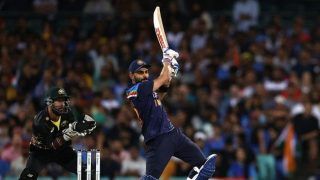