With seven opening ceremonies of Indian Premier League (IPL) 2017 being done and dusted, it is now time for Delhi Daredevils (DD) to host their opening ceremony, the last of the lot, at Feroz Shah Kotla in Delhi on Saturday. The ceremony will happen prior to their match against Kings XI Punjab (KXIP). The live cricket streaming of the opening ceremony will be available on Hotstar. The live telecast of the match will be available on Sony Six and Sony Six HD in English, along with Hindi commentary on SET MAX, while SONY ESPN and SONY ESPN HD would telecast it in Tamil, Telugu and Bengali commentary as well. LIVE CRICKET SCORECARD, Delhi Daredevils vs Kings XI Punjab Match 15

Rapper Dilin Nair aka Raftaar and Bollywood actress Parineeti Chopra are expected to perform at Kotla. These two stars will also be joined by popular Punjabi singer Guru Randhawa in the 20-minute opening ceremony. As reported by ANI, Raftaar has stated, “I’m quite nervous and excited at the same time as this is first time I will be performing for a sporting league of such stature. I’m hoping to get Parineeti to rap a few lines with me on stage as I believe she is an incredible singer as a surprise for all my Diliwale fans. I will definitely perform on Dhaakad and Dishoom.”

Looking at the host side, DD began their journey in this edition of IPL quite disappointingly by losing to Royal Challengers Bangalore (RCB) in their first match but then they bounced back against Rising Pune Supergiant (RPS). Wicketkeeper batsman Sanju Samson scored a brilliant ton against RPS and the rest of DD bowlers did the job by bowling out Steven Smith’s team for 108. Delhi would aim to begin their home journey in this IPL with a win against KXIP. 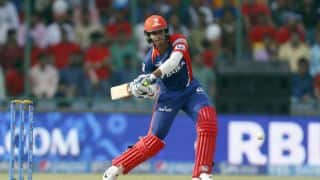