With a just over a week remaining for the first India vs Australia Test in Adelaide, the tourists are still pondering upon their opening pair.

With a just over a week remaining for the first India vs Australia Test in Adelaide, the tourists are still pondering upon their opening pair. Their ongoing tour match against a Cricket Australia XI in Sydney is expected them to give a clearer picture.

On Day two of their practice match at the Sydney Cricket Ground (SCG), five of their top-six batsmen struck half-centuries with KL Rahul being the only exception. He fell after scoring just three off 18 as he chased an outside off delivery, driving uppishly to be caught at extra cover. However, his opening partner Prithvi Shaw scored a quickfire 66 off 69 in his first innings on Australian soil.

Murali Vijay, another contender for the opener’s slot, didn’t bat in the first dig but is expected to get a go in the second innings.

“I would say there are still some spots to be taken,” India batting coach Sanjay Bangar told reporters on Thursday. “We will also keep a close eye on how second innings goes. We might give some other batsmen a hit especially, push them up the order a bit and see how they go. So there are certain spots there to be taken for the first Test. We are looking at the opening slot as well as the No.6 slot. Those are the positions we are still not decided yet.”

India have no qualms over the quality of their opponent for the practice match and Bangar said the team management is satisfied with the outcome as they wanted their batsmen to spend some time getting acquainted with the conditions.

While the opening day of the fixture was washed out, on the second day, half-centuries from Prithvi Shaw, Cheteshwar Pujara, Virat Kohli, Ajinkya Rahane and Hanuma Vihari helped India to 358 in 92 overs.

“Not at all,” Bangar replied when asked if they were unhappy with the quality of CA XI. We understand there are Shield games going on and we’re pretty happy with whatever they’ve put up against us. They put in a lot of effort right throughout the day and that’s what we were looking at.”

He continued, “Pretty useful time in the middle and it was important that we switch to this format of the cricket because a lot of guys have been coming from the T20 format. And the Test guys coming in except for Pujara most of them had first-class game in New Zealand. Pretty much happy that all of them got to spend some time there in the middle and get some runs under their belt as well.”

Guys went out there with an intent to get accustomed to the bounce for those playing there first game in Australia. No matter how different the conditions could be in Adelaide because this is not a fast paced pitch as you would expect there or in Perth. We were out here to make the most of whatever we get and from that perspective Virat again switching format from T20 to a four-day format. Then Pujara who missed a game in New Zealand straightaway coming back and settling into a nice groove. Ajinkya spending a lot of time he hit just one boundary but was making sure that he got to play a number of balls there. Hanuma Vihari, again, playing with a lot of confidence and clarity. Rohit coming back, again getting a knock out there, spending some time. [It was] a satisfying effort from our side,” he said. 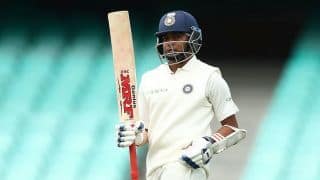 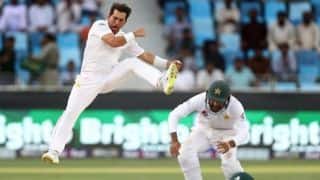