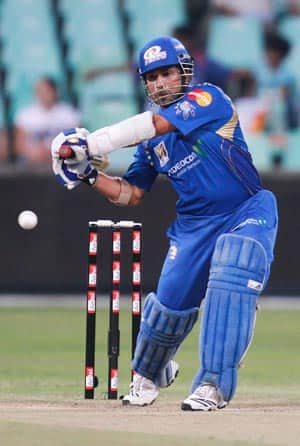 “I thought the way Gayle started, specially first over and following five overs that set the tone for them. We came back strongly in the last ten overs, they may have ended going above 200,” Tendulkar said after his team was restricted to 142-8 chasing 186 to win.

“The opening partnership didn’t work for us in the first half of the tournament, in the last three games it improved. But the middle order I felt could have been more consistent, but it could not happen,” he added.

The senior India batsman said even though his team gave away 15 runs extra he was still confident of a successful run chase.

“I thought we ended up giving 15 runs extra, couple of wides here and there. 170 would have been par. I felt it was possible. This is a high-scoring game, it was within our reach. I thought it was a good track, it was coming on nicely, we managed to hit boundaries. In the middle overs we got stuck. We should have hit more boundaries,” he added.

His Bangalore counterpart Daniel Vettori attributed their feat of reaching the finals to Gayle, who is currently the highest run-scorer in the tournament with 608 runs in 11 matches to his name.

“It is a continuation of how we have played most of the season. It’s certainly not easy to bowl to Gayle, he hits the ball hard and has no such weakness, he has been a great asset for us and is also the reason why we are in the finals,” Vettori said.

“Our opening bowling was a big plus, it put pressure on the opponent. Aravind was able to take early wickets again, whatever Mumbai threw at us, we were able to counter with great bowling,” the New Zealander said.

Asked about their summit showdown with Chennai Super Kings on Saturday, Vettori said it would be challenge as their rivals know the conditions better than Bangalore.

“It is going to be tough, Conditions are going to suit Chennai, they know the pitch well and it will be a slow track. So it would be challenge,” he said.

Man of the Match Chris Gayle, who hit a whirlwind 47-ball 89 to set the win for Bangalore, said it was the most successful run of his career.

“Lasith and Harbhajan are their key bowlers so I was looking to be a bit tentative against them. The outfield was very quick and wicket was good to bat on. Mayank took some pressure off me by facing Harbhajan. This is one of the most successful runs of my career,” Gayle said.

“I hope I can do it one more time on Saturday. Hopefully we can lift the trophy. Sweetest victory would be to beat the home team at home,” he added.

RCB pace spearhead Zaheer Khan said his team deserved to be in the finals looking at the way they played so far in this season.

“We have one win, Chennai have won the other, Saturday is the decider. We have been playing well throughout and deserve to be in the final,” he said.

“Once we lost against Chennai, we were pumped up to see them in the finals. The pitch worked in our favour, the hot and humid conditions did not hold the pitch together, we did not expect it to deteriorate so quickly,” he added.