Cheteshwar Pujara's 16th Test hundred and first in Australia helped India recover to 250/9 at stumps, after they had been reduced to 127/6 at one stage.

India‘s first innings hero Cheteshwar Pujara on Thursday conceded that the top-order should have batted better on day one of the first Test against Australia.

Pujara’s 16th Test hundred and first in Australia helped India recover to 250/9 at stumps, after they had been reduced to 127/6 at one stage.

“Hopefully we will bat well in the second innings. As far as my innings is concerned, I had prepared well and overall I have the experience of first-class and Test cricket and that came in handy today,” he said.

Pujara put on vital partnerships with R Ashwin and Ishant Sharma in the end, as the Australian pacers tired. He opened up and played a few more shots to take India to what the batsman ascertained to be a competitive total.

He added that the wicket wasn’t as easy to bat on, and that he needed to take a lot of time to play his shots, which again reflected poorly on how the Indian top-order batted on Thursday.

“Also, the difference is, I had batted for two sessions and I knew what the pace and bounce of the pitch was. I was set, so I could play my shots. I was a bit disappointed but I had to take that single because only last two balls were left and I wanted to be on strike. I took the chance but Pat Cummins fielded brilliantly,” he said of run out on what turned out to be the final ball of the day.

Pujara feels 250 is a decent first innings total, considering the conditions. “I would say it is a decent total because there is enough turn. Ashwin will also come into play. It is not an easy wicket to bat on. Sometimes when you are seeing it on TV, it doesn’t look like it is doing a lot. But when I batted in the first and second sessions, I felt it wasn’t easy to bat on and with our fast bowlers, I will share my experience of what line and length to bowl on this pitch.

Pujara is not known for hitting sixes but it is something he prepared for ahead of the series. “To be honest, when I was preparing back home, I was working on a few shots and that was one of them. I wasn’t surprised that I hit it for a six because I had worked on it back home. I had to obviously bat for two sessions to realise that these are the shots I could play and there were some shots which I had to avoid,” he said. 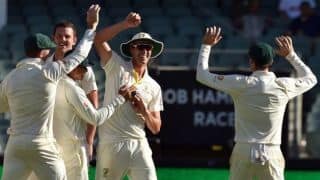