Bumrah, it is learnt is currently undergoing a rehabilitation programme at the BCCI's National Cricket Academy (NCA) in Bengaluru.

India fans were in for some pleasant news on Saturday when Jasprit Bumrah‘s recovery post stress fracture was revealed to be on track and that the 25-year-old pacer from Ahmedabad is expected to take the field by January.

Bumrah, it is learnt is currently undergoing a rehabilitation programme at the BCCI’s National Cricket Academy (NCA) in Bengaluru.

And being the senior most campaigner at the Academy, Bumrah seems to be mentoring the inexperienced players as well. On Saturday, another fast bowler Navdeep Saini posted a picture of himself on the field taking tips from Bumrah. “Every practice session is not just a session for a moment… but a learning for life,” Saini, who has played five Twenty20 Internationals, wrote.

Meanwhile, the 26-year-old Saini, who was part of Delhi’s squad for the Vijay Hazare Trophy 2019-20 picked up 10 wickets in six matches. With pace clocking above 150 kmps, Saini has the capability of cementing his place in the squad when the opportunity comes knocking at his door.

Bumrah, who last featured for India in the Test series against Windies where he was lethal with the red ball, has become the most crucial player for India. “He underwent assessment and his recovery is on track. Can expect him to be back in Indian colours in January and the Australia series could be the one,” a source who is in the know-how of the developments, was quoted as saying by IANS.

Bumrah, who has scalped 62 wickets in 12 Tests at an average of 19.24 but he is yet to play a Test match on Indian soil. 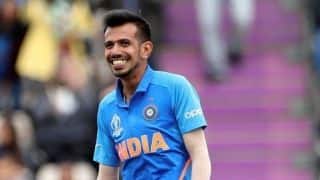