The live cricket streaming of the Day3 of 1st Test between India and West Indies is available on tensports.com, along with OZEE and DittoTV app on your mobile.

Hosts West Indies take on visitors India, on Day 3 of the first of the four-match Test series at the Sir Vivian Richards Stadium, in Antigua on Friday, as the live cricket streaming of the match is available on tensports.com, along with OZEE and DittoTV app on your mobile, while the live telecast of the match is available on Ten 3 and Ten 1 HD, along with Hindi commentary on Ten 2. Virat Kohli’s first double-century in any form of first-class cricket and Ravichandran Ashwin’s third Test century against the West Indies anchored India’s formidable first innings total of 566 for eight declared on the second day of the first Test on Friday. LIVE CRICKET SCORECARD: India vs West Indies 2016, 1st Test at Antigua

Left to negotiate a testing hour before the close of play, the West Indies lost Rajendra Chandrika to a catch at the wicket off Mohammed Shami, leaving opening partner Kraigg Brathwaite and nightwatchman Devendra Bishoo to resume on the third morning at 31 for one. On another day of generally fruitless toil for the West Indies, Kohli extended his batting masterclass from the first day for another two hours, adding another 57 runs to reach exactly 200 just before the lunch interval, reports AFP. LIVE CRICKET UPDATES: India vs West Indies 2016, 1st Test at Antigua, Day 3

“It was great to get pushed up the order. I don’t get surprised with what I do because I really enjoy my batting, but I know I still have a lot of work to do to really establish myself in the top six,” said Ashwin following his innings. “It’s going to take a while for everything to click in the bowling department because this is a very young group. Some of our guys need to work on their pace but it will take some time to get it right,” added Roddy Estwick, West Indies bowling coach. 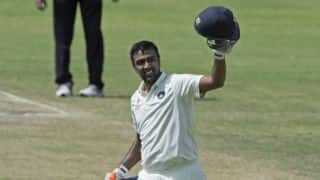