Former India and Punjab pacer Manpreet Singh Gony has announced retirement from all forms of cricket, bringing an end to a career that lasted 12 years.

Former India and Punjab pacer Manpreet Singh Gony has announced retirement from all forms of cricket, bringing an end to a career that lasted 12 years. The 35-year-old played two ODIs for India, both in June 2008, during the Asia Cup in Pakistan in which he took two wickets.

Apart from that, in 90 T20s, he claimed 96 wickets at 25.00 and has represented the likes of Chennai Super Kings, Deccan Chargers, Kings XI Punjab and Gujarat Lions in the cash-rich Indian Premier League.

His career was marred by injuries, hampering his progress. “He had the speed and accuracy and that helped him make his debut for Punjab against Andhra in 2007 and later saw him play for India and for various teams in IPL. He was one of the fastest and accurate bowlers for Punjab. If he had not faced injuries, he would have played in more matches and picked up more wickets,” Gony’s coach Sukhwinder Tinkoo told The Indian Express.

Gony will now ply his trade in the Global T20 Canada league where he’ll join countryman Yuvraj Singh who recently announced his retirement as well.

Punjab captain Mandeep Singh paid rich tributes to the retiring right-arm pacer. “Manpreet paji was the backbone of fast bowling for Punjab since his first class debut for the team and I also got chance to see and play against him in IPL in 2010 and the following years…Young pacers also learnt a lot from him, Mandeep was quoted as saying. 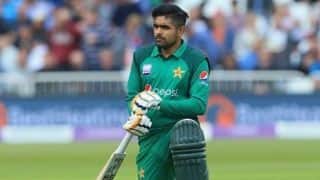 If you consider Virat Kohli your idol, then learn to play like him: Shoaib Akhtar tells Babar Azam