The star-studded top-order collapsed yet again as India were left tottering at 73 for 4 during the opening session, on the first day of the third cricket Test against Australia, at the WACA. 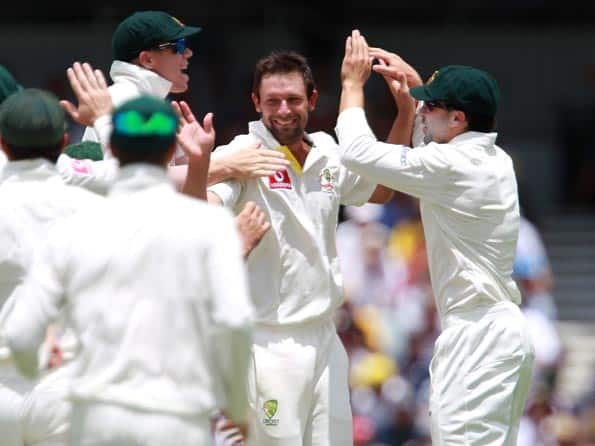 The star-studded top-order collapsed yet again as India were left tottering at 73 for 4 during the opening session, on the first day of the third cricket Test against Australia, at the WACA.

Virender Sehwag (0), Rahul David (9), Sachin Tendulkar (15) and Gautam Gambhir (31) were cooling their heels in the pavilion as VVS Laxman (4 batting) and Virat Kohli (10 batting) held fort during the break.

Ben Hilfenhaus, top wicket-taker for Australia in the series so far, once again set the tone with figures of two for 25 for his first session’s effort, ably aided by Peter Siddle and Ryan Harris who took the other two wickets.

India were 4 for 1 in the fourth over of the innings.

Dravid survived 34 balls but was beaten off most of them, indicating the great No 3 batsman presently is not in the best of form.

The introduction of Siddle finally signalled his exit, in the by now familiar manner as the pacer successfully breached Indian stalwart’s defence. The delivery was pitched full on his leg stump and Dravid, slightly late on the stroke, dragged it back on to his stumps.

Just before Dravid was dismissed, he had square driven Siddle to the point boundary.

Gambhir was occasionally beaten but he seemed intent on leaving deliveries on or around his off-stump and this technical approach helped his and the team’s cause.

After an extended period of circumspection, Gambhir once cut left-arm paceman Mitchell Starc over the slips which nearly went for six and then straight drove a full-pitched Hilfenhaus delivery to the fence.

Sachin Tendulkar arrived to his customary standing ovation on yet another Australian ground and immediately stamped his class on the proceedings by twice driving Siddle down the ground?once pushing it past the bowler and then on-driving to the left of mid-on.

Tendulkar slammed another four off Siddle when he off-drove him as it drew a huge applaud from the sell-out crowd at the WACA.

Gambhir moved into the 30s in a streaky manner when a Ryan Harris delivery took the edge of his bat and went past the vacant gully area to the fence.

The partnership for the third wicket had yielded 27 runs with the duo playing out 10 overs. With lunch being only minutes away, India lost both Tendulkar and Gambhir in a space of six deliveries.

Comebackman Harris got a ball to shape in to Tendulkar who tried to put it away to on-side, missed it completely and was ruled leg before by Sri Lankan umpire Kumara Dharmasena.

The veteran faced 25 deliveries and hit three fours during his knock.

The first delivery of the next over, bowled by Hilfenhaus, ejected Gambhir from the middle. The left-hander’s tentative prod to a Hilfenhaus delivery that moved a shade after pitching was accepted gleefully by wicketkeeper Brad Haddin behind the stumps. (PTI)