Hello and Welcome to CricketCountry’s live coverage of 4th Quarter-final  of the ongoing ICC Under-19 Cricket World Cup. The match will be played between Pakistan Under 19 and West Indies Under 19 sides at Fatullah. Pakistan coming into this match have won all their Group B games. In their last match against Afghanistan, making 129 runs in just 31.3 overs chasing 126. West Indies on the other hand came second in their Group C standings. West Indies only ended up losing their final match against England by a huge 61 runs. The team which wins this match, will go into the semi-final stage will face LIVE CRICKET SCORECARD: ICC Under 19 World Cup 2016, Pakistan vs West Indies, 4th Quarter-finals at Fatullah

Live Cricket Score: West Indies 229/5 in 40 overs | Batting: Keemo Paul 24(16),  Jyd Goolie 26(32): West Indies with this qualify for the semi-final stage,will now play hosts Bangladesh. Keemo Paul scored the winning run making 24 from 16 ball while Jyd Goolie made a well played 26 runs in 32 balls. 43 run stand between Jyd Goolie and Shamar Springer was the turning point of the game as Windies had lost a quick couple of wickets.  Springer was out to a Sameen gul delievery giving a simple catch to Shadab Khan making 37 runs. Tevin Imlach and Shimron Hetmyer made 54 and 52 runs respectively to provide West Indies with a solid start they were aspiring for.

Live Cricket Score: West Indies 148/4 in 29 overs | Batting: Shamar Springer 7(14),  Jyd Goolie 1(5): West Indies after starting off-well have managed to provide the much needed relief to the Pakistan teaming after hurriedly providing them with wickets. Fourth wicket to go was T Imlach who got run-out as he ran to a Shamar Springer call. Imach had was caught ball tracking, when he suddenly ran towards the other end. Imach got out making a good 53 from 75 balls.

Live Cricket Score: West Indies 104/1 in 15.2 overs | Batting: Tevin Imlach 34(37),Shimron Hetmyer 40(31) : This has been a brillaint batting display by the West Indies batting. Both Tevin Imlach and Shimron Hetmyer has hit boundaries and sixes at will. Imlach so far has managed to 37 runs while Hetmyer is on 46 from 35 balls hitting 7 four’s and one six. Gidron Pope made a 18 ball 25 runs hitting two six’s and 2 four’s, got out to Ahmad Shafiq giving an easy catch to Hasan Mohsin

Live Cricket Score: West Indies 31/0 in 4 overs | Batting: Tevin Imlach10(19), Gidron Pope 19(10): The West Indies have managed to get off to a good start making 31 run in the initial overs. Gidron Pope has raced ahead to 19 runs from 10 balls while Tevin Imlach has done just the opposite 10 runs in 19 balls. Both Sameen Gul and Hasan Moshin has been hit to the rafters.

Live Cricket Score: Pakistan 154/5 in 41.1 overs | Batting: Umair Masood 66(83), Salman Fayyaz 34(57):  Both Umair Masood and Salman Fayyaz have so far added 97 runs for the sixth wicket. Masood in the mean while as crossed the fifty runs mark and provivded the much needed impetus to the team. Fayyaz has supported him well making 34 in 57 balls.

Live Cricket Score: Pakistan 78/5 in 25 overs | Batting: Umair Masood 25(40), Salman Fayyaz 4(11): Pakistan are in deep trouble after having their half a team down. Last wicket to go was an important one for them Hasan Moshin. Moshin was playing good, before giving a simple catch to the keeper, trying to hit one through the covers off Keemo Paul. Masood has looked in good form so far, hitting quite a few boundaries.

Live Cricket Score: Pakistan 50/4 in 18 overs | Batting: Umair Masood 4(13) ,Hasan Moshin 14(29): Pakistan this morning have kept on losing wickets after wickets. Fourth wicket to go was Saif Badar, who was picked up by spinner Shamar Springer for 10 runs. The winner of this match will go and face Hosts Bangladesh in the semi-finals. Hasan in the last match made a 86 ball 86 runs, will hope to rekindle his form and get Pakistan to a safer total.

Live Cricket Score: Pakistan 25/3 in 10 overs | Batting: Badar 4(13) ,Moshin 4(3):  Saif Badar and Hasan Mohsin will now look to rebuild the innings. Pakistan winning the toss, decided to bat first. Holder got West Indies to a good start picking up the early wicket of Zeeshan Malik for 3 facing 15 balls. His partner Mohammad Umar was next to go for 8 was picked up by Alzarri Joseph, lbw placing 24. Holder picked up his second wicket making 1 run.

Pakistan won comfortably by 6 wickets and proceed to next level vs Afghanistan.Pakistan in their second match against Canada chased their target of 178 run very easily winning the game by 7 wickets. In their first match they defended 212 runs on the board against Sri Lanka, taking the match by 23 runs. Pakistan had earlier lost the warm up game against India. West Indies on the other hand were much in news for all the wrong reasons,  against Zimbabwe. Kemo Paul who won the match via ‘Mankading’ by just 2 runs.  In their second match they had defeated Fiji by a humongous margin of 262 runs. Their first match was a disappointment losing the match vs England by 61 runs. 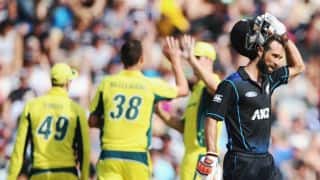