Haris Sohail and Saad Nasim were batting on scores of 27 and 12 respectively.

Pakistan brought up the 100-run mark for the loss of five wickets during their second One-Day International (ODI) against Bangladesh at Mirpur on Sunday. Haris Sohail and Saad Nasim were batting on scores of 27 and 12 respectively, while Shakib Al Hasan continued to lead the bowlers with figures of 6-0-18-2.  Live Updates: Bangladesh vs Pakistan, 2nd ODI at Mirpur

Bangladesh are currently leading the three-match ODI series 1-0 after recording a 79-run win against Pakistan in the 1st ODI at the same venue, which was their second-ever win against the fellow subcontinent side, ending the 16-year wait for the same. Bangladesh rode on tons by Tamim Iqbal and wicketkeeper batsman Mushfiqur Rahim, who scored 132 and 106 respectively, before bowling Pakistan out for 250. Live Streaming: Bangladesh vs Pakistan 2nd ODI for Pakistan users

Pakistan earlier won the toss and elected to bat, with Azhar Ali retaining the same team as the first ODI. For Bangladesh, regular skipper Mashrafe Mortaza made his way into the side after serving a one-match ban that was handed to him due to the slow over-rate during the ICC Cricket World Cup 2015 quarter-final, replacing Abul Hasan for the same. Live Streaming: Bangladesh vs Pakistan 2nd ODI for Bangladesh users 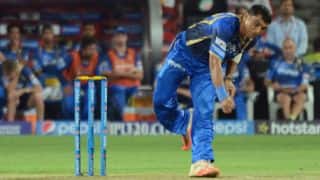