Pakistan declared at 174 for 8 in their second innings against West Indies, having taken a lead of 303.

West Indies lost Kieran Powell on the final ball of the day to end Day Dour of the third Test at 7 for 1. They need 297 more runs to win on the final day, with nine wickets remaining. Pakistan declared at 174 for 8, having taken a lead of 303. West Indies will have to bat incredibly well to save this match on the final day. Pakistan were in a spot of bother when they started the session on 72 for 5. Alzarri Joseph continued his good from as he removed Sarfraz Ahmed and Asad Shafiq in quick succession, leaving Pakistan in further trouble at 90 for 7. West Indies would have sensed a chance of bowling Pakistan out for under 120, but that is when Mohammad Aamer and Yasir Shah joined hands. FULL CRICKET SCORECARD: PAK vs WI 2017, 3rd Test

They put on 61 for the eighth wicket, which took Pakistan s lead past 250. Yasir was caught behind off Devendra Bishoo, but Bishoo had over-stepped. Aamer played a handy knock of 27, before hitting it to Bishoo at cover to give Joseph his third wicket of the innings. New batsman Hasan Ali and Yasir then decided to go after the bowling. Hasan hit a four and a six on his way to a 6-ball 15. Once Pakistan crossed the 300-run mark, Misbah-ul-Haq immediately declared. Yasir eventually finished with his career best score of 38 not out off 55 balls and was also the top-scorer for Pakistan in the second innings. Full Updates: Pakistan vs West Indies 3rd Test, Day 4

West Indies started the day on 218 for 5, but a collapse ensured that they were bowled out for just 247, therefore conceding a lead of 129. Mohammad Abbas picked up his maiden five-wicket haul and it was Roston Chase, who top-scored yet again for West Indies with 69. He came out to bat after Shane Dowrich was dismissed in the first over of the day. Chase had earlier walked out of the field retired hurt on Day Three. However, Jason Holder remained unbeaten on 30.

Pakistan in their first innings scored 376, thanks to a brilliant ton by Azhar Ali. Misbah, Babar Azam and Sarfraz Ahmed scored fifties to help Pakistan to a good total. Chase was the pick of the bowlers with 4 wickets, while Holder chipped in with 3.

On Day One, West Indies won the toss and elected to bowl first. West Indies did not make any change to their XI. Pakistan roped in Hasan Ali in place of Shadab Khan and Shan Masood in Ahmed Shehzad s place. The three-match series is level at 1-1. A win for Pakistan in this match will give them their first series win in the Caribbean. 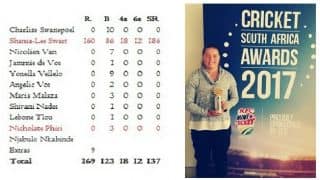 Shania-Lee Swart is CSA Under-19 Player of the Tournament 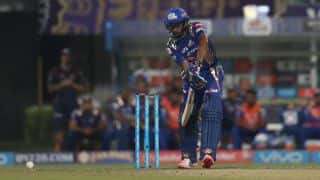