Ajmal was banned earlier this month after he was found to straighten his elbow up to 43 degrees.

Following the ban of ace spinner Saeed Ajmal, Pakistan cricket officials on Thursday suspended 16 domestic bowlers with suspect actions in a major crackdown against chucking. Ajmal was suspended earlier this month after he was found to straighten his elbow up to 43 degrees, well above the prescribed limit of 15.

The ban jolted the Pakistan Cricket Board (PCB) into action to avoid further international embarrassment. “We have 29 bowlers reported for suspect bowling actions in the current home cricket season and half of them were reported twice, so we have banned around 16 from domestic matches. All these bowlers will not be allowed to play in domestic matches and will go to the national cricket academy to get their actions altered,” director of domestic cricket Inthikab Alam told reporters as reported by cricket.com.au.

To deal with the problem, the PCB has revived its biomechanics laboratory in Lahore this month after it was left idle for seven years over allegations of financial irregularities in buying its machinery. Ajmal was the seventh Pakistani reported for suspect actions in international matches, joining Shahid Afridi, Shabbir Ahmed, Mohammad Hafeez, Riaz Afridi, Shoaib Malik and Shoaib Akhtar.

Even the two spinners called up to replace Ajmal while he undergoes remedial work — Atif Maqbool and Adnan Rasool — have been reported. Speaking separately, Captain Misbah-ul Haq said he was “praying” for Ajmal, who is ranked the world’s best one-day bowler, to return soon. “First of all I will pray Ajmal returns to the team for the World Cup,” he said.

Australia and New Zealand co-host the mega event from February 14 to March 29. “But we also have to be ready to play without him. If a player is not there you have to cope with that situation. There is no doubt he is a great bowler and will be missed.” 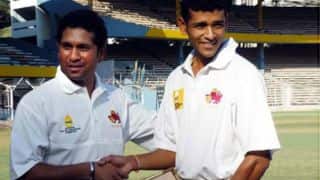