Pakistan bowled out for 628, lead by 290 against Bangladesh at lunch on Day 4 of 1st test at Khulna

Pakistan bowled out for 628, lead by 290 against Bangladesh at lunch on Day 4 of 1st test at Khulna

Pakistan started their innings on Day 2, as the openers, in the form of Hafeez and Sami Aslam.

Pakistan were bowled out for 628 on Day 4, against Bangladesh of the first Test of the two-match Test series, at Sheikh Abu Naser Stadium in Khulna on Friday. Pakistan currently lead by 290 runs at lunch. LIVE Scorecard: Bangladesh vs Pakistan 2015, 1st Test at Khulna, Day 4

Earlier, Bangladesh had started their innings after winning the toss and electing to bat first as they finished on 332, courtesy of Mominul Haque‘s healthy innings of 80 and Imrul Kayes‘s knock of 51 as Wahab Riaz and Yasir Shah claimed three wickets each. READ: Bangladesh have the edge over Pakistan at the end of Day 1

Pakistan started their innings on Day 2, as the openers, in the form of Mohammad Hafeez and Sami Aslam put up the opening 50-run stand, but Aslam was dismissed just after the stand by Taijul. However, what followed next was more or less the turning point of the innings as Hafeez along with Azhar Ali put up a whopping 227-run stand for the second wicket and it went on until Day 3, before Azhar was dismissed by Shuvagata Hom for 83 at the score of 277. LIVE Updates: Bangladesh vs Pakistan, 1st Test, Day 4 at Khulna

Out came veteran, Younis Khan and along with Hafeez put up a healthy 62-run stand for the third wicket before he fell for 33 to Taijul. It led to the arrival of skipper, Misbah-ul-Haq, who too played a healthy innings to put up a 63-run stand for the fourth wicket, fell for 59 to Taijul again. READ: How Pakistan turned things around on Day 2

Meanwhile, Hafeez was on song as he steered his innings to score his maiden double-hundred and at the score of 205, he also became the top Pakistan batsman with the highest individual score against Bangladesh in Tests. He was finally dismissed for 224 by Shuvagata. READ: Pakistan end Day 3 with 205 runs lead

His dismissal led to the arrival of Asad Shafiq who put up another 66-run stand for the fifth wicket with Misbah. Following Misbah’s dismissal, it was Sarfraz Ahmed, who put up a 126-run stand for the sixth wicket. Sarfaraz was dismissed for an impressive 82 by Shakib on Day 3, followed by Shafiq for 83. Following their dismissal, the tail-enders failed to score big as Pakistan were bundled for 628, but had earned a healthy lead of 296.

Bangladesh openers, Tamim Iqbal and Imrul Kayes came out to bat for the second innings and have managed to score just six runs for no loss, as they still trail by 290 runs. 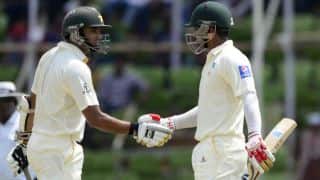