Waqar Younis, who quit as Pakistan cricket coach last week, says the squad he managed is highly capable of taking the country to the top of the world rankings. 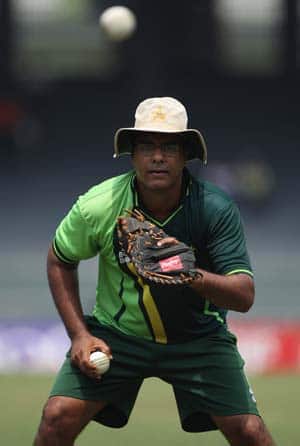 Waqar Younis, who quit as Pakistan cricket coach last week, says the squad he managed is highly capable of taking the country to the top of the world rankings.

Lahore-based Pakistani cricketers and the Pakistan Cricket Board (PCB) officials gave Waqar a farewell Friday night at the National Cricket Academy, hours before the former captain left for Sydney, reports The Express Tribune.

Waqar, who had said the Zimbabwe tour would be his last, citing personal and health reasons for quitting, was with the team for a little over a year.

‘It’s not like I won’t be coming back to Pakistan as this is my own country,’ said Waqar before departing from Lahore airport.

‘I am leaving for personal reasons, but once things improve, I will definitely give coming back a thought. In the meantime, it was a good experience with the PCB as well as the players. Coaching Pakistan was an experience altogether which went well.’

Waqar, who decided to step down before his contract ended in December, is said to be suffering from a liver ailment for which his Sydney doctors have advised him long-term treatment under their direct supervision.

Despite severe criticism by former captain Shahid Afridi, Waqar termed his tenure successful as he facilitated the creation of a team that is gelling well.

‘I am leaving the team as a unit and I hope they remain that way. They are capable of giving Sri Lanka a tough time. And with the spirit in the team that I have seen, I am optimistic of good results.’

‘I have worked with him in various capacities and found him a true professional,’ said Alam.

‘Apart from his wonderful cricketing career, he has now done an excellent job with the team as a coach and obviously his resignation is a setback to our plans.’

‘His performance was outstanding,’ said PCB chairman Ijaz Butt. ‘I can understand the reasons for his wanting to leave and I hope he is able to resolve all his issues. He’s welcome to come back and serve Pakistan cricket any time.'(IANS)

'The dropping of Thilan Samaraweera came as a surprise'