Inzamam-ul-Haq, Pakistan's chief selector, insisted that though the playing conditions for Pakistan in England were tough, he was confident that his side could defeat their oppositions on their home soil.

Inzamam-ul-Haq, chief selector of the Pakistan Cricket Board (PCB), has expressed optimism about his young-looking side’s chances of thrashing England and Ireland in the upcoming Tests. The former skipper had named five uncapped players in the 16-member Pakistan squad for two-match Test series against England and one-off Test against Ireland.

However, Inzamam insisted that though the playing conditions for Pakistan in England were tough, he was confident that his side could defeat their oppositions on their home soil.

Our team is quite capable of winning the Test series against England and the one-off Test against Ireland, the Dawn quoted Inzamam, as saying.

Skipper Sarfraz Ahmed, Azhar Ali, Asad Shafiq, Sami Aslam, Mohammad Amir and Rahat Ali are the only players named in the touring side who have played Test matches for Pakistan in England previously.

He further defended the selection committee’s decision to include a number of youngsters in the national Test squad, saying, Whenever promising youngsters are tested in international competitions, we should not be afraid of defeat as this is the part of the game.

When asked if the future of two tainted players Mohammad Asif and Salman Butt, both of whom were not considered in the national squad, is over, Inzamam ruled out the same.

I do not rule out return of Salman Butt and Mohammad Asif [to national team]. However having said this, our focus is on [talented] youngsters as we are looking at the future, he said.

Asif, along with Butt and Mohammad Aamer, was found guilty of various offenses of corrupt behaviour relating to the Lord’s Test between England and Pakistan in August 2010 by the independent Anti-Corruption Tribunal in February 2011.

Although Aamer returned to the national team in impressive style against New Zealand in January 2016, Asif and Butt remained side-lined and are yet to be considered for Pakistan selection despite their impressive show in domestic circuit.

On a related note, Ireland are slated to play their inaugural lone Test against Pakistan from May 11 before the latter side head into England for two-match series, beginning May 24. 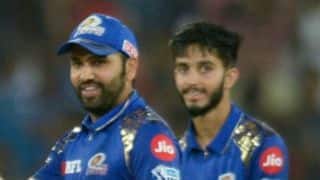