Pakistan coach to be selected in Misbah's presence

Pakistan coach to be selected in Misbah's presence

Skipper Misbah-ul-Haq will attend the Pakistan Cricket Board's meeting on Thursday when a shortlist of candidates for the post of national coach -- left vacant after Waqar Younis's resignation -- will be finalised. 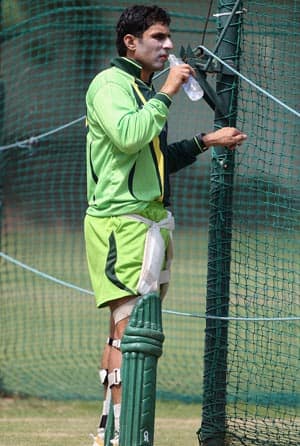 Skipper Misbah-ul-Haq will attend the Pakistan Cricket Board’s meeting on Thursday when a shortlist of candidates for the post of national coach — left vacant after Waqar Younis’s resignation — will be finalised.

Misbah confirmed that he would be present in the meeting.

“So far the board has not taken any feedback from us but I think I will be attending the meeting on Thursday in which a shortlist of candidates will be discussed and than I can give my feedback as well,” he said.

The PCB has formed a special committee, headed by former player Intikhab Alam, to recommend a suitable candidate for the post for which it had received applications from about 35 local and foreign coaches.

Misbah also spoke at length about the impact Waqar’s decision to resign had on the team.

“Obviously his resignation came as a shock to us and his going at this time when we are going to play some very tough series will be felt. But I guess we are professionals and we have to be mentally strong enough to move on and fulfil our responsibilities in the coming series,” he said.

Misbah admitted that Waqar, a former Test captain, had a very positive impact on the team, and he had developed a good understanding with him.

“We worked well together and he was always there to support me and back me in difficult and pressure times. His absence will be felt but now the boys are mentally prepared to work with a new coach,” Misbah said.

The senior batsman who has been in superb form in recent times, said the boys were not thinking about the new coach.

“It is the management’s decision whether (to appoint) a local coach or a foreigner but we have to work with him. It is not going to be easy adjusting with a new coach and it will take some time to settle down,” he said.

The Pakistan captain said the positive thing was that the players in the national team had been playing together for sometime after going through tough times.

“What satisfies me is that we have developed as a unit and become mentally stronger and every player knows what his role is. So eventually everything will work out with the new coach and our common aim is to do well in the coming series.”

Misbah said that the biggest plus point of the recent tour to Zimbabwe was the emergence of some new players.

“Obviously the series against Sri Lanka and England are going to be much tougher but, when we went to Zimbabwe they were on a high and in a confident mood after beating Bangladesh, so we did well to clean sweep the series and the new players did well.”

He said that for the coming series against Sri Lanka in the UAE and for the tours of Bangladesh and England, the idea would be to utilise both the senior and junior players.

“We have choices now and we will use experience and the new players accordingly. We have some very experienced bowlers and bowling has always been our strength, so I am pretty confident we can do well in these coming series.”

Misbah also admitted that it was his desire to see Pakistan improve upon their current Test ranking (6th) and reach the top four atleast in the coming series.

“We are playing eight Tests against these three countries so we have a good chance of improving our ranking to the top four and there is also the incentive of qualifying to play in the World Test championship whenever it is held by the ICC,” Misbah said. (PTI)

Katich disappointed with batting despite win over Trinidad & Tobago