Pakistan won the One-Day International series against Zimbabwe with a 3-0 whitewash by taking the closing match with 28 runs to spare at Harare Sports Club on Wednesday. 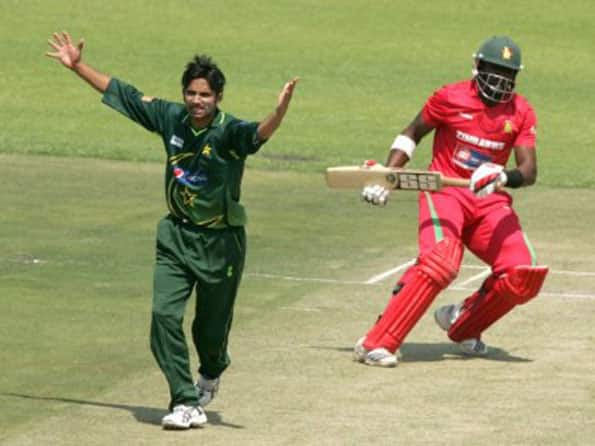 Pakistan won the One-Day International series against Zimbabwe with a 3-0 whitewash by taking the closing match with 28 runs to spare at Harare Sports Club on Wednesday.

Pakistan, having been put into bat by the hosts captain Brendan Taylor, set a target of 270-5 with Zimbabwe making 242-9 in reply.

Pakistan captain Ul Haq said afterwards that Pakistan’s policy of sending out a young and relatively inexperienced team had paid off and he was delighted with their overall performances.

He said: “This is all a good sign for the future of Pakistan cricket and from that viewpoint alone it was worth coming.”

Pakistan, who had scrambled to a five run win in the opening match and took the second by 10 wickets, were always the dominant side.

Zimbabwe put up a strong showing, their failing being continually behind the required run rate.

Pakistan got off to a spirited start through Mohammad Hafeez and Imran Farhat, who sped to 32 runs in the first three overs.

The innings settled after that, especially when Harfeez fell for 23 and Farhat for 37.

The run rate settled on about five an over, even though Asad Shafiq, one of three young players introduced scored 51 and the old campaigner Younis Khan made 81.

It was Shafiq’s fifth half century and Khan’s 44th. Khan was out to a wonderful caught and bowled by Kyle Jarvis just when he had his sights on a seventh ODI century.

Shoaib Malik once again disappointed with 14 and the finishing touches were aggressively applied to the Pakistan innings by Misbah ul Haq, 29, and Adnan Akmal with 24.

Their target, stated before the match by Ul Haq to be 270 to 280 was therefore satisfactory, and seemed on the recent form of Zimbabwe to be well beyond the home team’s reach.

However Zimbabwe made a serious effort to get there. But even though Justice Chibhabha with 62 and Vusi Sibanda on 59 made a strong early showing, it didn’t have the pace of run gathering necessary for a launch towards the end.

With Taylor failing by scoring only six, those who followed made an effort to catch up with a rising run rate necessary but were never really in the chase, and at the end Zimbabwe needed eight, ten and eventually 14 an over for the win.

Aziz Cheema was the best of the Pakistan bowlers with 4-43 and he was named man of the match. He has been the newcomer with the most success even though he is somewhat of a latecomer at 32 years of age.

Man of the series was Younis Khan, who went about his business with polished calm and took the catch of the match on the boundary in dismissing Tatenda Taibu, who had just previously hit six, one of six scored on the day.

The Pakistan tour continues with two Twenty-20 entertainments at Harare on Friday and Sunday. (AFP)

Man of the Match: Aizaz Cheema

Man of the Series: Younis Khan