Pakistan defeated Sri Lanka by six wickets in their rain-truncated first One-Day International at the Pallekele International Stadium on Thursday. 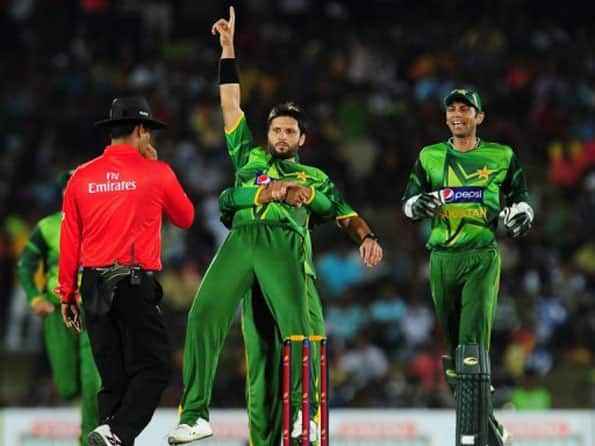 Pakistan defeated Sri Lanka by six wickets in their rain-truncated first One-Day International at the Pallekele International Stadium on Thursday.

Mohammad Hafeez top-scored for Pakistan scoring 38 runs providing stability at the top of the order in order to help Pakistan register a comfortable victory.

Pakistan pacers Umar Gul and Mohammad Sami impressed with three wickets each as their side remained in control throughout the first innings.

Gul bagged three for 24 off his nine overs, while Sami claimed three for 19 with two maidens in his six-over spell.

Lahiru Thirimanne played a crucial knock of 42 not out, which came off 73 balls and three boundaries. Thirimanne’s knock was the only bright spot for the Sri Lankan side.

Sri Lanka skipper Mahela Jayawardene won the toss and chose to bat against Pakistan in the first of the five-match ODI series, but his decision backfired as they suffered a batting collapse.

The hosts were reeling at 41 for five in the 15th over of the innings, with none of the top order batsman getting double figures.

Earlier, the two sides played two-match T20 seires, and the trophy was shared by both the teams after Pakistan registered a convincing win in a low scoring match at Hambantota.

Man of the Match: Umar Gul