Pakistan's Mohammad Hafeez with 139 runs and Imran Farhat with 75 formed a record-breaking opening partnerhip of 228 runs against Zimbabwe to secure an overwhelming win in the second ODI to take the three-match series. 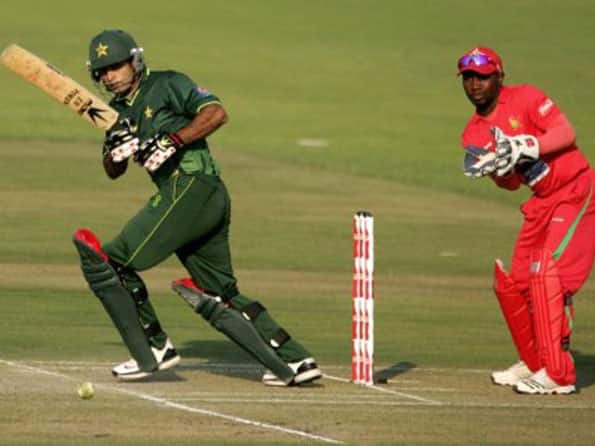 Pakistan’s Mohammad Hafeez with 139 runs and Imran Farhat with 75 formed a record-breaking opening partnerhip of 228 runs against Zimbabwe to secure an overwhelming win in the second ODI to take the three-match series.

Their combination beat the previous mark set by Saeed Anwar and Ramiz Rajah of 204 against Sri Lanka.

The Pakistani pair stayed together for the entire 42.1 overs necessary to record a ten wicket victory over a hapless home side who had scraped together 225-6 in their 50 overs.

Hafeez, who recorded his third ODI century and was later named man of the match for the second time on this tour, needed only 147 balls while Farhat’s 75 required 106 balls.

They treated the Zimbabweans with apparent disdain, running leisurely and with the occasional strike for boundaries. They gave the home side the appearance of one that still has a long way to go before competing seriously against quality Test teams.

In reaching 30 runs, Hafeez passed the 2000 mark in ODIs, adding more than 100 more on the way to the next thousand.

It was the fifth time that Zimbabwe had been beaten by ten wickets in 400 ODI’s played over the years.

In restricting Zimbabwe to 225 runs at Harare Sports Club, Pakistan kept the home batsmen well under their thumb.

Winning the toss and decided to bat, Brendan Taylor’s team got off to a very slow start and they struggled throughout as Junaid Khan and Sohail Tanveer bowled three maidens in the first seven overs.

Vusi Sibanda scored one run from 20 balls before getting out for 14. Hamilton Masakadza managed only four from his first 25 balls faced. And Zimbabwe only managed 22 runs in the first ten overs.

Masakadza ended with 68 runs but from 118 balls, well below par compared with the performance of Hafeez.

Masakadza held the team together, but he fell well short of what he should have scored from that number of deliveries and he must take some blame for the final total on the way to his 18th half century.

Taylor also got 50 runs, his 23rd half century, while Taibu hit a bright and adventurous 26. Elton Chigumbura and Prosper Utseya took 13 off Tanveer’s last over, but it always looked too little, too late.

It was as much Pakistan’s opening attack success as Zimbabwe’s failure in the early stages of the innings. Khan finished with 1-29 in 10 overs, and Tanveer took two wickets for 43 in nine overs.

Masakadza and Chigumbura hit sixes but they were more gestures than substantive contributions.

Zimbabwe Coach Alan Butcher commented afterwards: “This was a bad result of course but we need to see the last few matches overall to get a proper picture. There are not many positives though.

“We need to expand our own innings earlier. Zimbabwe has been prone to collapses in the past and the present players are conscious of this and consequently are over-cautious.”

This was the fifth match in a row against touring sides that Zimbabwe have lost. The final ODI of the tour is on Wednesday and two Twenty-20 matches follow. Zimbabwe’s hopes of redeeming themselves with those three encounters cannot be very high. (AFP)