Pakistan ended Day Three of the second Test match against South Africa at 132 for four in Dubai on Friday. The deficit was reduced to 286 runs with six wickets in hand. 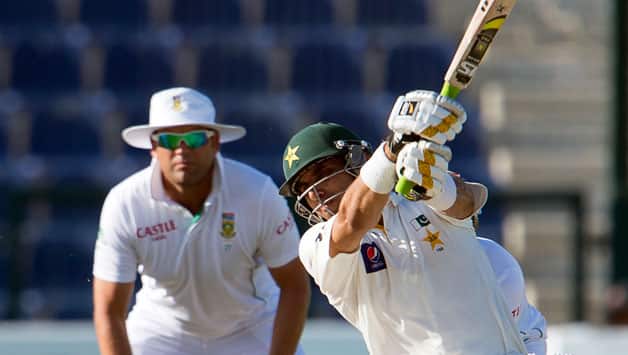 Pakistan ended Day Three of the second Test match against South Africa at 132 for four in Dubai on Friday. The deficit was reduced to 286 runs with six wickets in hand.

Skipper Misbah-ul-Haq was unbeaten on 42, with Asad Shafiq for company batting on 28.

South Africa were on Friday fined five penalty runs during the third day of the second and final Test against Pakistan for ball tampering allegations.

The incident happened before the start of the 31st over of Pakistan’s second innings as umpires Rod Tucker (Australia) and Ian Gould (England) called South Africa captain Graeme Smith for a chat.

Though no player was called during the talk, replays on television showed Faf du Plessis rubbing the ball on his trousers which had a zip.

The umpires changed the ball and penalised South Africa by five runs.

Earlier, after resuming the session at two for two, Pakistan lost the wicket of Azhar Ali, who was trapped Leg Before Wicket. The experienced pair of Younis Khan and Misbah was at the crease when Tea was taken.

Pakistan reduced the deficit to 362 runs with seven wickets in hand.

Earlier, Pakistan showed a much-improved bowling performance from Day Two as Mohammad Irfan dismissed AB de Villiers early for 164. Irfan dished out a full delivery outside de Villiers’s off-stump and Adnan Akmal took a simple catch. Graeme Smith (234) fell after adding just seven runs to his overnight score. He was caught by Akmal after dropping him earlier. Saeed Ajmal got his third wicket in the pursuit.