Sharjeel Khan was dismissed for a brisk 38-ball 40, but Azhar Ali and nightwatchman Yasir Shah successfully negotiated the Australian bowlers without further damage.

Pakistan were 55 for 1 at stumps on Day Four of the third Test against Australia at the Sydney Cricket Ground (SCG), needing to bat throughout the final day in order to save the match. Pakistan still need 410 runs more to win and register their first win of the series. Sharjeel Khan was dismissed for a brisk 38-ball 40, but Azhar Ali and nightwatchman Yasir Shah successfully negotiated the Australian bowlers without further damage. Australia had declared their second innings at 241 for 2, thereby setting Pakistan a target of 465. David Warner slammed the second fastest fifty in Test history to get Australia off to a brisk start, and the rest of the batsmen maintain the momentum. Warner achieved this feat off just 23 deliveries. Misbah-ul-Haq is the world record holder for the fastest Test fifty, which he got against Australia at Abu Dhabi in 2014.

Warner put on 71 off just 52 deliveries for the opening wicket with Usman Khawaja, before he missed a wild swing from Wahab Riaz, which saw the ball smash into his wickets. Khawaja and skipper Steven Smith added another 103 in really quick succession before Smith was caught down the leg side off Yasir, for 59 off just 43 deliveries. The on-field umpire had turned down the appeal, but Pakistan took the review immediately. The replays showed that the ball had just brushed Smith s gloves on its way to Sarfraz Ahmed.

Australia did not let Pakistan breathe easy despite losing their best batsmen. Peter Handscomb then joined Khawaja. Over the next 7 overs, the duo added 67 runs. Australia reached 241 for 2 off just 32 overs in their second innings, at a run rate of 7.53 against a depleted Pakistan bowling attack.

The declaration was imminent and Smith signalled that a target of 465 was enough. Khawaja remained unbeaten on 79, while Handscomb finished with 40 not out off just 25 deliveries.

Earlier in the day, Pakistan were bowled out for 315, with Younis Khan remaining not out on 175. Younis and Yasir added 51 for the ninth wicket, before Josh Hazlewood removed the latter and then got rid of the last man Imran Khan in a mere 3 deliveries.

Matt Renshaw, who is suffering from concussion, has been ruled out of the Test. Pakistan too were short by one man, as Mohammad Aamer did not bowl on the fourth day as he was suffering from side strain. Aamer is expected to recover in the next 3-4 days and is most likely to be fit for the One-Day International (ODI) series.

In the first innings Australia had declared at 538 for 8, with Renshaw, Warner and Handscomb all scoring centuries. On Day One, Australia had won the toss and elected to bat first. Australia have already clinched the three-match series in their favour after victories in Brisbane and Melbourne. If Pakistan lose this match, they would have lost 6 games in a row a new record for them. 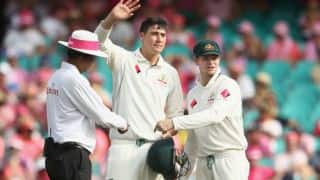