Pakistan gets two quick wickets after dismissal of David Warner

Pakistan gets two quick wickets after dismissal of David Warner

Pakistan managed to get two quick wickets after Aaron Finch and Steven Smith gave a good start to Australia in the first ODI played at Sharjah.

George Bailey and Glenn Maxwell got starts but couldn’t convert them. Bailey got out slogging a length ball while Maxwell who looked rusty got out lofting a full delivery. While, Steven Smith was still on the crease playing the anchor role for Pakistan. He had already achieved his first ODI half-century for Australia. Maxwell got out after scoring 21 runs while Bailey Departed for 18. 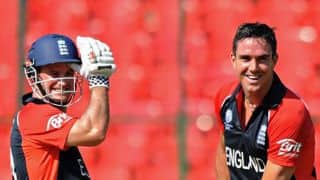