Australia started the day at 113 for zero, having made a strong fightback after allowing Pakistan to score 454. Chris Rogers was the first man to depart for the visitors. Rogers had played a slow knock of 38 from 130 balls, and his successor Alex Doolan too couldn’t add much to the Australian total as he was dismissed on 5.

Michael Clarke, who wasn’t successful in the warm-up match against Pakistan A, continued his bad run-of-form as he was dismissed after having scored just two runs. Steven Smith, Mitchell Marsh and Brad Haddin – all started of well but couldn’t convert the start they got into a big score. Mitchell Johnson provided some solid resistance at the bottom of the order, and scored  a well-fought 37. He was looking set for a bigger innings, but was tempted to play an irresponsible big shot, and was caught near the boundary line.

The session after Lunch was high in terms of reviews taken, and both teams benefited from it. Marsh was adjudged not out after being given out off a Rahat Ali delivery but as luck would have it, he was dismissed after being given not out as a review went in Pakistan’s favor.

For Pakistan, debutant Yasir Shah was the pick of the bowlers as he took three wickets for 39 runs. The other bowlers too chipped in with wickets, and did not allow the Australians to build a solid partnership right from the start of the day. 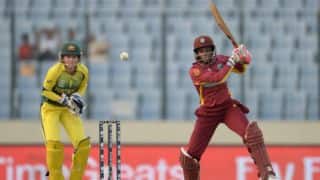