Pakistan went to lunch on Day 5 of the first Test at Abu Dhabi at 35 for 2 and are still trailing by 40 runs with eight wickets in hand. Although the match is heading speedily towards a draw but England are well capable to script a turnaround in the next session. Their approach has been attacking but it’s unlikely that Pakistan will lose eight more wickets in a session on a wicket which has nothing for the bowlers. England after a solid batting display fumbled in the end but somehow managed to gain a advantageous lead of 75 runs in the first innings s they declared their innings for 598 for 9. They lost the Adil Rashid in the morning as Imran Khan shattered his stumps with a beauty. England after being in a comfortable position asked Pakistan to bat. Pakistan started off tentatively and lost two early wickets in the form of Shan Masood and Shoaib Malik.  Live scorecard: Pakistan vs England 2015, 1st Test Day 5 at Abu Dhabi

James Anderson charged in and kept troubling Pakistani batsmen with his guile. His inswinging delivery to the left-hander Masood got a bottom edge of his bat and disturbed the stumps which provided England an early breakthrough. In came their man in form and also the double centurion from the first innings Shoaib Malik who was tested with a bouncer from Anderson early on in the innings. In an attempt to get away from the trajectory of the ball, Malik ended up with a thick bat on it as the ball landed in the safe hands of Jonny Bairstow. LIVE UPDATES: Pakistan vs England 2015, 1st Test at Abu Dhabi, Day 5

Mohammad Hafeez and their most experienced batsman Younis Khan have somehow steadied the Pakistan ship and are trying to weather the early storm. Hafeez has been in a good nick whereas Younis will try to make the most of this batting opportunity and gain some confidence for the rest of the series. Pakistan would be well aware of the fact that a session is enough to turn around things and hopefully their batsmen will bat sensibly. 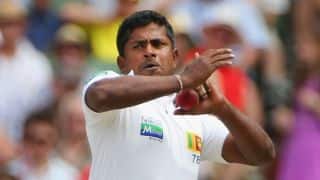