New bowlers, including leg-spinner Yasir Shah, will be joining the team.

A reliable source close to the national team management told PTI that new bowlers, including leg-spinner Yasir Shah, will be sent to the United Arab Emirates for the last three or two ODIs against New Zealand.

“With big question marks over the availability of Saeed Ajmal and Mohammad Hafeez [as a bowler] for the World Cup, the think-tank wants to try out different bowling options in this series,” the source added. He said there was also a strong chance that former captain Shoaib Malik could be enrolled into the final World Cup squad to replace Hafeez.

Malik was told by the board to fly to Abu Dhabi this week and apply with other players for the Australian visa. “The form of Umar Gul remains dicey while Pakistan clearly needs another quality spinner to partner Shahid Afridi in ODIs,” the source stated. He said the selectors could try out both leg-spinners Afridi and Yasir in the last two ODIs against New Zealand while left-arm spinner Reza Hasan is also under consideration.

“The selectors also want to try out Rahat Ali, Ehsan Adil, Junaid Khan and Imran Khan in the pace bowling department.” Yasir, who had a successful debut Test series against Australia and also against New Zealand, was not retained for the ODIs.

“In the past Pakistan have played two leg-spinners at same time with considerable success.” The source said Moin and Waqar wanted to finalise their 15 for the World Cup when the team returns home from the UAE in late December. 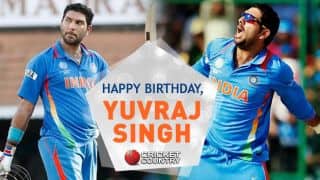