In New Zealand's second innings all six wickets were taken by spinners.

Pakistan and New Zealand have played out another eventful day of cricket as after the end of Day Four the tourists finished with 167 for six in their second innings. They have a lead of 177 and four wickets are still remaining, which calls for an exciting last day’s play at the Dubai International Stadium.

In the whole day, no team got any clear advantage as the match swung like a pendulum. The first hour belonged to the Kiwi pacers, Tim Southee and Trent Boult as they took three for 38 and hoping for a lead of around 70-80 runs. But an attacking hundred of Pakistan wicketkeeper Sarfraz Ahmed and a disciplined batting by the last man Rahat Ali changed the game. The Pair frustrated the tourists and added 81 runs for the 10th wicket.

During the course of that partnership, Sarfraz brought up his third Test ton. Interestingly all three centuries have came in this season. Sarfraz has also become the only wicketkeeper to score three Test tons in the current calendar year. He propelled to his hundred from the 70’s with a flurry of boundaries. His innings narrowed all the advantages that the Kiwis had.

It took the Kiwi skipper Brendon McCullum to roll his arm over and took the last Pakistani wicket in the form of Sarfraz who made career best 112. The Pakistanis were finally bowled out for 393, which gave New Zealand a lead just 10 runs. At that point of time it looked the match was heading towards a draw.

New Zealand came out firing in their second innings. Specially McCullum kept the scoreboard ticking. His attacking innings was giving the tourist some chance to finish the day on a high note. But the game changed once again when the spinners Zulfiqar Babar and Yasir Shah were introduced in the attack by Misbah-ul-Haq. They were getting sharp turns and produced some unplayable deliveries to claim the wickets of Corey Anderson and Jimmy Anderson.

Ross Taylor played a counter attacking knock to rescue New Zealand somewhat. His 93 ball 77 was priceless in the context of the game. On fifth day Taylor’s wicket will be crucial for both teams as Pakistan would not like to chase more than 200 runs on a dry and tuning Dubai track. At the end of fourth day New Zealand were 167 for six and all wickets fell to the spinners. Babar and Yasir took three wickets each. 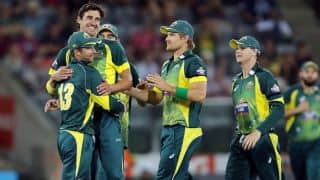