Fast-rising paceman Aizaz Cheema on Wednesday said the Pakistan team was not reading much into England's recent run of poor batting displays, acknowledging that Test matches would be a different ball game. 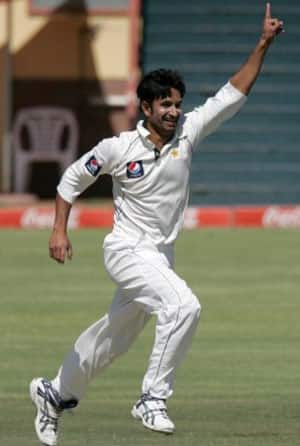 Aizaz Cheema said conditions in UAE will help his side AFP

Fast-rising paceman Aizaz Cheema on Wednesday said the Pakistan team was not reading much into England’s recent run of poor batting displays, acknowledging that Test matches would be a different ball game.

England, which rose to world number one in Test rankings last year, were restricted to 185-8 and managed 261-7 during their hard fought three-wicket win in a three-day match against an ICC Combined XI.

They were also unimpressive with 269-9 declared against Pakistan Cricket Board XI on Wednesday, with only opener Alastair Cook showing good form, scoring 133.

“Test match cricket will be different, it will have different conditions and teams will have a different approach come the first Test,” said Cheema of the three-Test series which starts from January 17.

“At the back of their mind England players will know that they are playing a Test so we are not reading much into their failures in the side’s games and are ready for them,” said Cheema.

The 32-year-old Cheema made his mark with eight wickets in his debut Test against Zimbabwe in September last year and has since been an ever-stay in the team.

Pakistan have not lost a Test series since losing to England in 2010 – a tour marred by the spot-fixing scandal which ended in jail terms and bans for then-captain Salman Butt, Mohammad Asif and Mohammad Aamer.

Cheema said it was essential that all bowlers kept the basics right. “England may be the top team in the world but we need to do the basics right, like we always do and if you give hundred per cent then any team can struggle against you,” he said, admitting that Cook and fellow opener Andrew Strauss would be a challenge.

“I am a swing bowler so I will do my best to get the early swing and give a good start for the team,” said Cheema. “Strauss and Cook pose a real challenge because they are a very mature opening pair.

“We need to get them out early because when you get openers early it puts pressure on the middle order,” said Cheema. “The conditions and the pitches are similar to Pakistan, so those will help us.”

The Tests will be followed by four one-day and three Twenty20 internationals. (AFP)

Tendulkar practises batting out of crease during India's training session