Pakistan lead the three-match series 1-0 and Sri Lanka will be looking to win the current Test and level the series.

Pakistan were steady in their run chase despite losing Mohammad Hafeez early in their second innings on Day Three of the second Test against Sri Lanka at P Sara Oval, Colombo. They trail by 115 runs as Ahmed Shehzad was not out on 39 and Azhar Ali was not out on 14. Pakistan were 62 for the loss of one wicket at lunch

Hafeez played a very loose shot to Angelo Mathews as Kumar Sangakkara took an easy catch at second slip to dismiss him. He scored 8 from 15 balls.

Earlier, rain delayed the start of play as incessant rain throughout the night kept the ground under cover. Sri Lanka resumed their innings at 304 for the loss of nine wickets. Rangana Herath and Dushmantha Chameera were not out at crease. Sri Lanka added 10 more runs before Chameera was dismissed by Yasir Shah, who took six wickets.

Shah registered back-to-back six-wicket haul. Sri Lanka were all out for 315 in reply to Pakistan’s 138. Kaushal Silva top scored with 80, whereas, Mathews scored 77.

Pakistan lead the three-match series 1-0 and Sri Lanka will be looking to win the current Test and level the series. 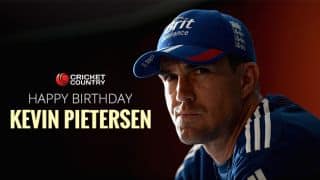