Tharanga top-scores with 92, Pakistan bowlers peg hosts back with wickets in last session.

Pakistan pacers struck crucial blows in the last session to leave Sri Lanka down to 261 for eight at stumps on Day One of the second Test at Sinhalese Sports Club (SSC), Colombo on Friday. The Lankans started off solidly with a 79-run opening stand but ended the day poorly losing their main batsmen cheaply. Pacers Wahab Riaz and Junaid Khan were the strike bowlers. It was Junaid who helped Pakistan gain momentum with two wickets in an over with the new ball.

The way Lanka started off in the first session, it seemed their hero Mahela Jayawardene would not bat at least till the second morning. The pitch was flat and there was nothing for any of the bowlers. It was predictable that the captain winning the toss will opt to bat on such a docile wicket. So discouraged were the pacers in the first hour that Misbah-ul-Haq brought a spinner from one end. Within no time Saeed Ajmal too was bowling with Abdur Rehman from the other end. Lanka went in to lunch at 69 for no loss; a cautious but steady start. The pacers too didn’t bowl full enough to trouble the batsmen on the drive.

However, in the next two sessions, the only positive moment for the Lankan fans was the arrival of Jayawardene, playing his final Test. However they lost two wickets in the second session and six in the last session to help Pakistan wrestle control. Junaid drew first blood getting an edge off Kaushal Silva driving to a fuller delivery and Wahab Riaz set up Kumar Sangakkara with few short balls and castling him with a fuller one. The stadium erupted in joy as Sangakkara walked back and Jayawardene walked out to bat. Right from his parents, wife, daughter and students from Nalanda College were present to watch the legend play his 149th and final Test of his career. Jayawardene survived till tea scoring four. However, the joy was shortlived as Saeed Ajmal once again proved to be a thorn as he removed the local hero leg-before. Ajmal has dismissed him nine times now.

But there was no reason for panic as the pitch wasn’t playing tricks. It was a fighting innings from Upul Tharanga (92) under pressure which held the innings together. He went to get his fifth Test fifty and looked on course for a ton. But to his bad luck a neatly timed flick stuck straight in to Azhar Ali at shortleg. Angelo Mathews and Niroshan Dickwella steadied the innings for a while before Junaid Khan with the new ball removed Dickwella for 24 and Dilruwan Perera for duck.

Those wickets had given Pakistan the edge on what was termed as a flat deck. Things only got better for Pakistan when Riaz removed Angelo Mathews for 39. At 261 for right, this is more than they would have dreamed of on a pitch like this.

In the end, the performance of the pacers will give a lot of confidence to the team. With 0-1 down in the series, they have done all the hardwork to start the quest for levelling the series on the right note. 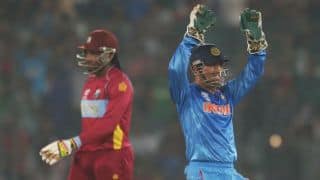