Haris Sohail was the highest scorer for Pakistan with a score of 85 coming of 109 deliveries.

Pakistan beat New Zealand by four wicket in a thrilling and nail-biting encounter during the first of the five-match ODI series at the Dubai Sports Complex in Dubai on Monday. The match went down to the wire till the final over for the decider. Haris Sohail was the highest scorer for Pakistan with a score of 85 coming off 109 deliveries. Pakistan lead the five-match series 1-0.

Earlier, Pakistan skipper, Misbah-ul-Haq had won the toss and elected to field first citing dew factor in the evening session. While New Zealand were off to a decent start but lost Dean Brownlie early at the score of 26 in sixth over after being dismissed off Mohammad Irfan. After another quiet few overs, it was skipper, Kane Williamson who departed for just 10 and it was Irfan again to dismiss him as the visitors were 44 for the loss of two after the mandatory powerplay of 10 overs.

However, it was the 44-run stand between wicketkeeper-batsman, Luke Ronchi and Taylor for the sixth wicket that put New Zealand in control for a while before Ronchi was dismissed in the 38th over by Irfan for 23 owing to a brilliant catch by Younis Khan. Ross Taylor also brought up his 27th ODI half-century during the stand.

It was followed by a 27-run stand for the seventh wicket between Taylor and Kiwis senior-pro, Daniel Vettori who was dismissed for 27 off 25 deliveries after being bowled by Riaz. Nathan McCullum joined Taylor in the pitch and it was Taylor also brought-up his 11th ODI hundred. Both put up a 33-run stand until the 50th over as the Kiwis finished on 246.

In the bowling department, it was Irfan who claimed the most wickets with three while Riaz claimed two and Shahid Afridi claimed one.

The chase for Pakistan began on a slow but shaky note as they lost their first wicket in the fifth over at the score of 13 when Mohammad Hafeez departed after scoring just six and was bowled by Kyle Mills. there was a healthy 27-run stand for the second wicket between Asad Shafiq and Ahmed Shahzad before Safiq departed in the 12th over for just five and soon it was Shehzad who followed for a healthy 28 off 41 deliveries getting trapped leg-before by Vettori.

It was just 12 runs added to the total when at the score of 52, Younis fell for just four off Vettori being caught by Brwonlie. It was followed by another healthy 34-run stand by Misbah and Haris for the fifth wicket before the skipper departed at the score of 86 in the 26th over after being caught off a screamer by Vettori off James Neesham.

Out came Sarfaraz Ahmed and put up yet another healthy 38-run stand for the sixth wicket. It was at the score of 124 when he departed after scoring 26 off 190 deliveries. The seventh wicket stand between Afridi and Haris turned out to be the turning point of the match with Haris bringing up his maiden ODI fifty. Afridi too scored his 37th ODI fifty, but was run out at the score of 234 after scoring61 off 51 deliveries, thus ending a massive 110-run partnership.

It was the pair of Haris and Wahab which finished things off as Pakistan won the match by three wickets in the final over with three balls to spare. Considering the Kiwi’s bowling performance, it was Vettori and Neesham claiming a couple of wickets each for 40 and 62 each. 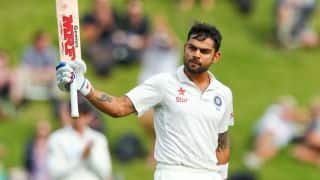