Pakistan restricted West Indies to 232 for eight in their 50 overs in the second One-Day International (ODI) match at Providence in Guyana on Tuesday. 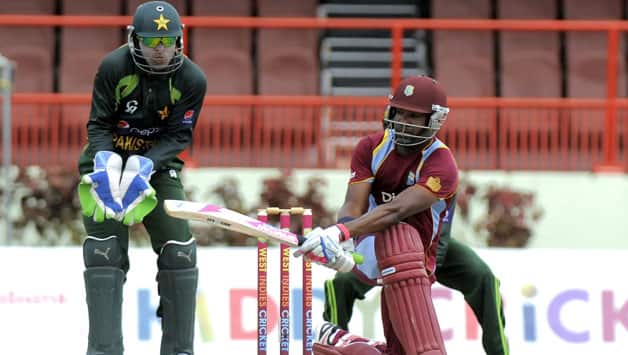 Pakistan restricted West Indies to 232 for eight in their 50 overs in the second One-Day International (ODI) at Providence in Guyana on Tuesday.

After winning the toss, Pakistan skipper Misbah-ul-Haq elected to field. The move worked immediately as pacer Mohammad Irfan dismissed the dangerous Chris Gayle for just one in the first over of the game.

Opener Johnson Charles and Darren Bravo resurrected the West Indian innings with a steady partnership of 80 for the second wicket.

Charles played an unnatural innings as he curbed his natural instincts to score 31 off 51 balls. However, he soon ran out of patience as he walked down the pitch to hit Shahid Afridi out of the park, but in turn lost his wicket as he completely misread the flighted delivery which gripped after pitching and Umar Akmal stumped the West Indian wicketkeeper-batsman.

The hosts continued to score at a slow pace as Darren Bravo moved to his 11th ODI half-century. He lost his wicket soon after to a brilliant delivery by Saeed Ajmal. Ajmal also dismissed Marlon Samuels, whose painfully slow innings came to an end with a poor shot. Pakistan took control of the match with Lendl Simmons falling after a few more overs.

However, skipper Dwayne Bravo and Kieron Pollard came to rescue the West Indian innings as they scored at a brisk pace. They added 70 runs in 58 deliveries for the sixth wicket. Pollard in particular, was severe on Wahab Riaz in the 47th over of the match.

In a bid to up the ante, West Indies lost a few wickets towards the end of the innings.

For Pakistan, Afridi shined with the ball yet again. Apart from picking up two wickets, he kept it tight and conceded only 29 runs in his 10 overs. Akmal too had a good day behind the stumps as he effected two run-outs, one stumping and took two catches.