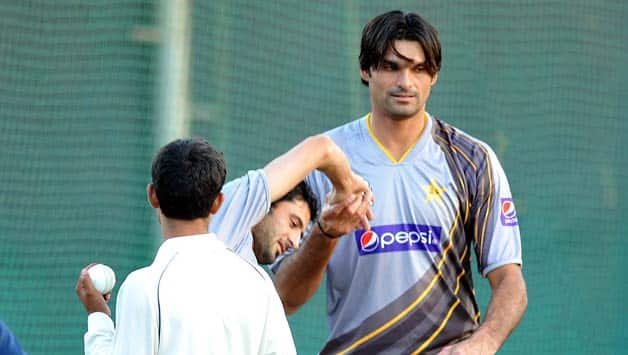 But on the cricket pitch, the 30-year-old former factory worker is more than comfortable with a new ball in his hands, cleverly exploiting his height to unsettle some of the best batsmen in the world with bounce, pace and variation.

Pakistan tagged Irfan a “surprise package” on their December-January tour of India and despite taking just three wickets, he plagued the opposition’s much-vaunted batting.

“We jokingly call him the short man,” Pakistan Twenty20 captain Mohammad Hafeez told AFP. “We knew he would be a surprise package and with his determination and hard work I hope that he can go a long way in international cricket.”

“My height was measured at the US embassy when I applied for visa in 2010,” Irfan told AFP, boasting of being the tallest ever international cricketer, surpassing West Indian Joel Garner and Australian Bruce Reid who stood at 6’8″.

He also claims to be the tallest known cricketer, beating English county players Anthony Allom, Paul Dunkels and Will Jefferson, all measured at 6’10”. 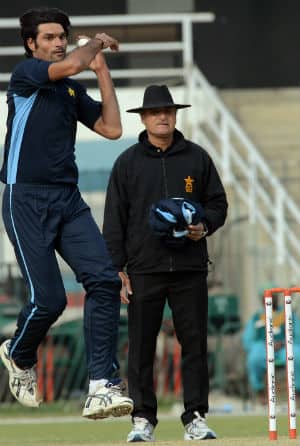 For Mohammad Irfan, height hasn’t always been an advantage © AFP

But for Irfan, height hasn’t always been an advantage.

He was born a farmer’s son in the small village of Gaggu Mandi in the central Punjab province, where he found his height hard to cope with, even as one of five brothers all over six feet tall.

“My height started to increase when I was in class eight,” Irfan remembers. “I couldn’t sit on the school bus properly, my uniform stopped fitting after a few days and people started to make fun of my height.”
His father, himself 6’9″, advised him to be patient.

“My schoolmates used to mock me saying, why am I in class eight when I am so tall. I used to come in my friends’s car with a special seat.

“I would join two beds to sleep properly and when I wanted to play cricket I couldn’t find proper shoes,” said Irfan who now gets shoes in a British size 15 from a friend.

Growing up, his role model was fellow villager Mohammad Zahid, who took eleven wickets in his debut Test in 1996 before a back problem cut short his career.

But he was discouraged by a lack of opportunity and took a job in a nearby pipe factory in 2000.

“Those were very difficult days for me,” remembers Irfan. “I wanted to play cricket but was forced to work for 300 rupees ($3) a week and the future was not looking good.”

Former first-class cricketer Nadeem Iqbal spotted him in a club match and sent him to Pakistan’s national cricket academy to be coached by former paceman Aaqib Javed and former opener Aamir Sohail.
Irfan made the most of it.

In 2009, he was picked up by the Khan Research Laboratories (KRL) team, set up by the father of Pakistan’s nuclear bomb AQ Khan, where Irfan turned into an explosive bowler, taking nine wickets in only his second match.

“Irfan was unique,” said Rashid Iqbal, manager of the KRL. “He has worked very hard to come this far and the most remarkable thing about him is that despite his height he has kept his fitness through extra work-outs.”

The KRL stint saw Irfan picked for Pakistan’s one-day series in England in 2010 but two wicketless matches seemed to end his career before it even started.

“I did not get discouraged and kept up the hard work,” said Irfan, who impressed coach Dav Whatmore enough during the national Twenty20 tournament in Lahore last month to be picked to stage a comeback in India.

Leaving Indian batsmen shaken, Irfan now bowls against the world’s number one Test team South Africa next month, aiming to prove that he is not all about height.