Pakistan are going strong losing just one wicket in the first session against Australia on Day Four of the first Test at Dubai on Saturday. Ahmed Shehzad scored his third Test fifty and helped his team take a 267-run lead at lunch. Shehzad is unbeaten on 55 along with Younis Khan on 26.

Pakistan resumed on the fourth morning with 38 on board and a comfortable lead of 189 runs. Skipper Michael Clarke introduced his two pacers as a token before the spinners soon started to operate from either ends for a long spell. Though the pitch had started to disintegrate, the business areas of the pitch were still settled and Pakistan openers Azhar Ali, Shehzad capitalised with sensible batting.

As overs passed by, Aussies looked desperate for the breakthrough. After five overs of pace, Steven O’Keefe and Nathan Lyon were pressed in to action. If the first innings is compared, O’Keefe wasn’t as successful as his counterpart Zulfiqar Babar who troubled the batsman more frequently. However, Lyon did manage to extract some sharp turn. In reply to the spin twins, the openers compulsively came down the track and played their shots. The attacking approach fetched them runs and got the lead past 200 in the first hour of play.

It was a mature approach adopted by Shehzad and Azhar who never looked unsettled by any bowler. It was only after a while that O’Keefe started giving more flight to the ball and started finding the edges. Though ‘keeper Brad Haddin missed a sharp bat-pad catch off Nathan Lyon, in the next over, O’Keefe managed to beat Azhar in the flight and Haddin took a sharp reflex catch.

The star of the session was Shehzad who made batting look easy on such a slow, turning wicket. He consistently hopped down the pitch fearlessly and read the length of the spinners well. He started off by attacking the spinners with lofted shots and mellowed down as the spinners corrected their line and fetched more turn.

But overall, it was a session dominated by Pakistan. Younis Khan summed it up with he showed the audacity to smash Lyon for a huge six over long-on in the last over before lunch.

Before the start of play today, head coach Waqar Younis looked keen to pile on a 400+ target. This also meant that they need to score quickly. However, that sense of urgency wasn’t visible in the first session. It won’t be a surprise if to see them impose themselves in the second session and possibly, Sarfraz Ahmed being promoted up the order to up the ante. 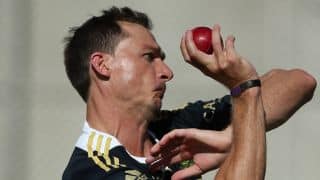 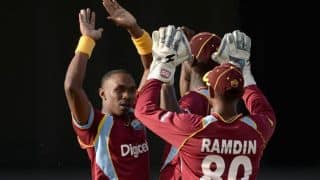