Nuwan Kulasekara and Suraj Randiv combined to vanquish Pakistan as Sri Lanka won the first Test by a massive 209 runs on Monday, their biggest win over their Asian rivals. 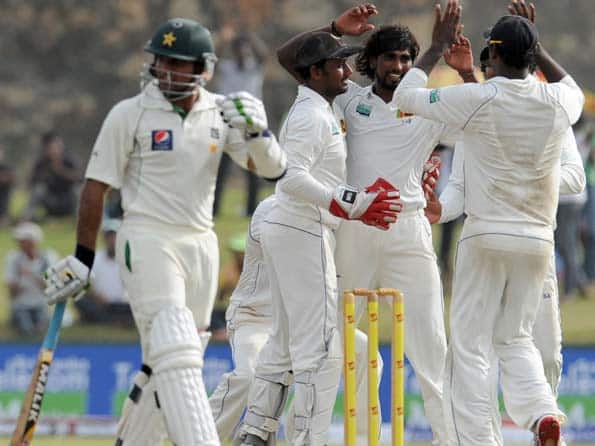 Nuwan Kulasekara and Suraj Randiv combined to vanquish Pakistan as Sri Lanka won the first Test by a massive 209 runs on Monday, their biggest win over their Asian rivals.

The tourists, set a near impossible victory target of 510, were bowled out for 300 just before stumps on the fourth day despite defiant batting from Younis Khan and Asad Shafiq.

The pair kept the Sri Lankan attack at bay for three hours to add 151 for the fifth wicket, Younis making 87 and Shafiq 80, before both fell on either side of the tea interval.

Off-spinner Randiv and seamer Kulasekara grabbed three wickets each to ensure Sri Lanka ended the match with a day to spare after Pakistan appeared to be taking the fight into the final day.

Randiv finished with seven wickets in the game, but it was team-mate Kumar Sangakkara who was named man-of-the-match for his unbeaten 199 in Sri Lanka’s first innings.

Jayawardene defended his decision not to enforce the follow-on despite a lead of 372 runs after Sri Lanka shot out Pakistan for a modest 100 in the first innings.

“The idea was to bat Pakistan out of the match and also give my bowlers a bit of a rest,” he said.

“The weather was a bit of a concern but then Kulasekara was outstanding with the new ball. Younis and Shafiq batted really well, but we knew that once we broke the stand, we will go through.”

Younis, 34, the most experienced batsman in the Pakistan side with 77 Test appearances, held the innings together during his 26th half-century in the five-day format.

Shafiq, a 26-year-old playing his 14th Test, matched his senior partner with a fluent knock that contained 13 hits to the fence.

But just when the duo appeared to have survived the entire post-lunch session, Shafiq was dismissed against the run of play, edging left-arm spinner Rangana Herath to Mahela Jayawardene in the slips.

Younis, who went to tea on 81, fell in the first over with the second new ball when he edged Kulasekara to wicket-keeper Prasanna Jayawardene.

Mohammad Hafeez, who led Pakistan after regular captain Misbah-ul Haq was banned from the Test for a slow over-rate in a one-day match, said he was proud of the entire team.

“Ours is a young side and this match was a learning experience for everyone,” he said. “There was very good spirit in the side and it was really satisfying to see Younis and Asad fight till the end.

“But we need to work hard at the nets. It will be a big boost when Misbah returns for the next Test.”

Randiv claimed the last three wickets to give Sri Lanka their third win in the last five Tests, a turnaround in form following a dip after the retirement of the legendary Muttiah Muralitharan from the five-day game in 2010.

Pakistan lost nightwatchman Saeed Ajmal in the day’s second over, run out by a direct throw from the covers by Suraj Randiv.

Younis earned a reprieve on nine when Tillakaratne Dilshan picked up a low catch at mid-off, but television replays proved inconclusive whether the catch had been taken cleanly.

The second Test starts at the Sinhalese sports club in Colombo on June 30. The third match will be played in Pallekele from July 8. (AFP)