Both Sri Lanka and Pakistan will look to win the series in order to improve their position on the Test table respectively.

Sri Lanka and Pakistan will look to consolidate their position on the ICC Test rankings during the upcoming two-Test series starting on August 6 in Galle.
While Pakistan will be looking to maintain its third position on the rankings table, the hosts hope to improve its sixth position with a series win. Pakistan and Sri Lanka currently hold their position with 103 and 95 points respectively.
A series win for Pakistan will consolidate their third position, behind South Africa and Australia at the first and second positions respectively. The hosts would drop to the seventh position with this result.
On the other hand if Sri Lanka wins the series, Pakistan would drop to the sixth position. While a 1-0 win would help Sri Lanka move up by a position, a clean sweep would help the hosts grab the fourth spot on the table. A 1-1 series draw would see the sides sit at their respective rankings.
The rankings scenario also depends heavily on the outcome of the ongoing five-Test series between England and India, which is scheduled to end a day after the conclusion of the Sri Lanka-Pakistan series. The Zimbabwe-South Africa series will also play a side factor in the arrangement of the table.

South Africa need to win their one-off Test against Zimbabwe at Harare in order to maintain their number one rank in the Test table. A loss or even a draw will see the Hashim Amla-led side lose their position to Australia, whom they regained the spot from after their recent 1-0 series win against Sri Lanka. A Zimbabwean win shall see the hosts gain ten points and close the gap with eighth-ranked West Indies.

The Test series between Sri Lanka and Pakistan will feature three of the Top 10 Test batsmen. Second-ranked Kumar Sangakkara, who was adjudged the ICC Cricketer of the Year in 2012, is expected to fire with the bat alongside sixth-ranked Angelo Mathews. Pakistan skipper  Misbah-ul-Haq shares similar responsibilities as he is currently ranked seventh.

The series will also be the last for veteran Sri Lankan batsman Mahela Jayawardene, who will hang-up his boots at the end of the series bringing the curtains down on an illustrious 17-year career. 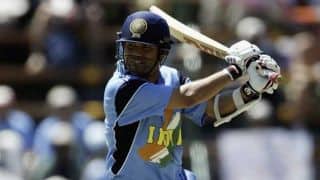 Sachin Tendulkar did not face a single ball in nets during ICC 2003 World Cup: Rahul Dravid 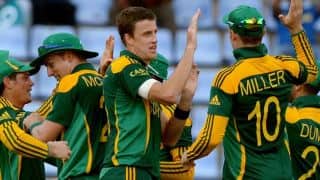