Implicated in the TV sting operation that claims to have exposed corruption by umpires, Pakistan's Nadeem Ghauri is planning to take legal action against the channel after getting the subtle backing of his Cricket Board which has "decided against jumping to conclusions." 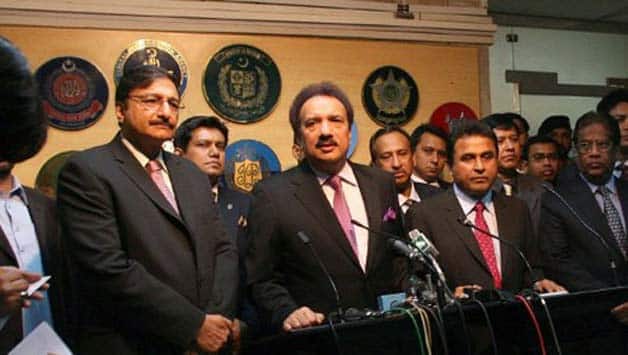 Implicated in the TV sting operation that claims to have exposed corruption by umpires, Pakistan’s Nadeem Ghauri is planning to take legal action against the channel after getting the subtle backing of his Cricket Board which has “decided against jumping to conclusions.”

Ghauri and another Pakistani umpire Anis-ur-Rehman have been accused, along with four other umpires from Bangladesh and Sri Lanka, of corruption by an Indian news channel which carried out a sting operation to get the umpires to speak on camera.

Ghauri has been shown speaking about corruption in cricket by umpires on Skype.

But on Tuesday he vehemently denied the allegations and said the video was fake.

Ghauri told reporters in Lahore that he spoke to the undercover reporter, who presented himself as a member of a sports management company, with regard to umpiring in the Sri Lanka Premier League (SLPL).

“I repeatedly told him that such matters are not discussed on phone,” he said.

Insisting that the video was fake and had been altered by the channel, Ghauri said he has met Pakistan Cricket Board officials and informed them about his stance on the issue.

“I will take legal action once the board also completes its inquiry,” he added.

Ghauri further said he had told the Pakistan Cricket Board officials about the SLPL offer and asked if they will allow him to go ahead with it.

He claimed that the PCB officials told him that the company which made the offer must contact the board directly.

Ghauri said the undercover reporters said they will make him a part of a reality show but an umpire in India, Anil Chaudhry, helped him find out that the offer was a fraud and the company does not exist.

The PCB also appeared to be behind its umpires as a spokesman said that it would not jump to conclusions.

“The board has decided against jumping to conclusions over corruption allegations levelled on six umpires, including two from Pakistan, by an Indian television channel, and said that the body was monitoring the situation and is onboard with the ICC on the matter.

“It is a sensitive matter and we don’t want to make premature comments but we are monitoring the situation and have been in touch with the ICC about it,” he said.

“The board maintains a zero tolerance policy towards corruption just like the ICC and the issue will be dealt accordingly after a thorough investigation.” (PTI)