Steven Smith's 16th ton power Australia to 288 for 3 against Pakistan on Day 1 of the 1st Test at the Gabba, Brisbane.

A wicket of David Warner and then an injury to his right knee, Mohammad Aamer had a topsy-turvy day. In that case, he hasn’t had a great year either a year that saw him rise from the ashes of spot-fixing and make an international comeback after 6 years. 11 drop catches had already frustrated him in the past 5 months, and then he looked in blinding pain as he tried to slide and stop the ball at deep fine-leg at the Gabba. The slide never happened. His knee stuck in the ground, twisting it even further. He was taken off the field by teammates and physio to the dressing room.

All in all, Pakistan had a rough day in the field after Steven Smith opted to bat. The track did not appear how it did the day before the match. The grass had vanished, and the talks of it being bowler-friendly were quashed. Australian batsmen, hence, proved it. They registered 288 for 3 on Day One of the first Test at Brisbane thanks to Steven Smith unbeaten 110. He shuffled, flicked, pulled, drove. More importantly, he left the ones intentionally pitched outside off. There were three slips in place waiting for an edge. He did not give any; though one fell just short of first-slip.

A 3-0 whitewash in Sri Lanka, 2-1 drubbing against South Africa at home, and selection conundrum, Smith has had a tough time of late. But that did not stop him from amassing runs. And when he does, he does it in abundance. This hundred must definitely have brought him some respite. More importantly, it put Pakistan off track on the opening day of the three-Test series.

Misbah-ul-Haq did well in first half of the day, keeping a lid on the runs, so much so that that Australia scored only two boundaries from over No. 5 to 17, with David Warner and Matt Renshaw at strike.

The three pacers were given their roles. Wahab Riaz choked the batsman, Rahat Ali tried different line and length, Aamer was asked to being Aamer. Meanwhile, Yasir Shah was introduced in the 11th over. Given the match starts post noon, the pacers would not get enough movement. Hence, introducing Yasir was a fair call. He got turn as well as bounce. Of course, he was bowling with a pink ball on an Australian surface.

Warner sensed the runs had dried up. He hurried for one and twos, and then a couple of boundaries. He is a busy player. But Aamer soon trapped him LBW, as he tried to walk across and nudge it on the leg-side.

Yasir then gifted his team another wicket. No. 3 Usman Khawaja dragged one straight to Misbah at mid-wicket.

Meanwhile, batting in only his third innings, Renshaw scored his maiden fifty. On the other hand, Smith had already started churning out boundaries.

Misbah yet again designed a ploy. His pacers bowled well outside off, with three slips and a gully in place. That did not affect Smith’s zen-like focus whatsoever. He left and left, until there was a loose delivery on offer. When in the zone, he made sure he punched it past cover-point. Otherwise, he let them go.

Renshaw, however, was dismissed soon, for 71. He became Riaz’s first scalp.

Then came the long partnership. Smith added 137 runs with Peter Handscomb for the 4th wicket.

Handscomb scored consecutive fifty in only his second match, and Smith his 16th century.

However, Aamer was seen bowling with the new ball. Though limping, he beat Smith’s outside edge on number of occasions. 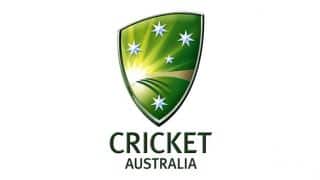