As the target for the visitors crept below 50, Steven Smith set an attacking field that almost instantly created half chances, before Mitchell Starc produced the game-changing moment.

Melbourne: Former England skipper Michael Vaughan has criticised the ridiculous tactics employed by Steven Smith after Australia escaped a narrow 39-run victory over Pakistan in the first Test of the three-match series at the Gabba in Brisbane on Monday. The Australian captain s tactics this morning has been nothing short of ridiculous, Vaughan tweeted. Having set Pakistan a world record 490 to win, Smith was accused of temporarily losing his nerve as he set a defensive field with only one slip and the visitors came within 39 runs of pulling off a run-chase miracle that would have hung over his captaincy forever, reports news.com.au. However, left-arm pacer Mitchell Starc produced a magical delivery to get rid of Asad Shafiq, who sent jitters to the Australian camp by scoring 137 and getting the visitors almost to an improbable victory.

Shafiq stitched together successive partnerships of 47 with Sarfraz Ahmed (24), 92 with Mohammad Amir (48) and 66 with Wahab Riaz (30) before Yasir Shah joined him to put on 71 for the ninth wicket. However, Starc stepped up to break the 71-run stand between the duo and end Shafiq’s magnificent knock featuring 13 boundaries and a six. Smith stood by the defensive mindset he applied to the most nerve-wracking day of his career, but admitted that from a team perspective Australia s young side must urgently develop a cut-throat edge.

As the target for the visitors crept below 50, Smith set an attacking field that almost instantly created half chances, before Starc produced the game-changing moment when he found a way to get the soft pink ball to leap at Shafiq and carry to David Warner at gully. Four balls later he produced the dead-eye run-out to finish the job and hand over his side a narrow victory. The Australian skipper had, after the match, said that the match was a bit too close for his liking. “I’ve lost all my fingernails, I think,” Smith said. “It was a bit too close for my liking. Some game of cricket wasn’t it?” 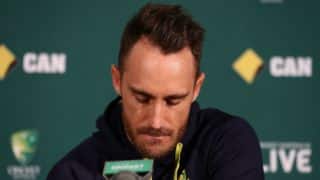 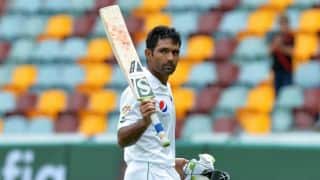