Misbah-ul-Haq elected to bat first after he won the toss but he soon came to regret the decision.

Pakistan went to lunch at a sub-par 50 for two against Australia in the first Test at Dubai on Wednesday. Already under pressure after losing the One-Day International (ODI) series, Pakistan were hoping for a positive start. However, that was not to be as the Australian pacers rocked the boat early on.

Mohammad Hafeez and Ahmed Shehzad came out to open the innings for Pakistan. Hafeez took strike against Mitchell Johnson, and the left-arm speedster was soon celebrating. Johnson steamed in, and sent down a thunderbolt that swung late and beat Hafeez all ends up. He was declared out LBW, but decided to call for a review — a decision that seemed absolutely absurd. The replays confirmed that he was plumb in front, and that the review was wasted.

Soon Peter Siddle joined in on the action when he cleaned up Ahmed Shehzad with a beautiful swinging delivery that took out the leg stump as Shehzad moved too far across. At seven for two, it seemed another routing was on the cards till Azhar Ali and Younis Khan dug deep to see off the new ball.

Neither man seemed overly keen on boosting the run-rate, focusing on survival rather than domination. Once the new ball lost its bite, the pitch seemed to get even lower and slower, as none of the bowlers were able to get the same purchase as Johnson and Siddle managed at the start.

The wicket at Dubai International Stadium appeared dead with a brownish tinge. Misbah-ul-Haq elected to bat first after he won the toss but he soon came to regret the decision. The match saw four debutantes, as Mitchell Marsh and Steven O’Keefe won their baggy greens for Australia, while Imran Khan and Yasir Shah were awarded Test caps for Pakistan. 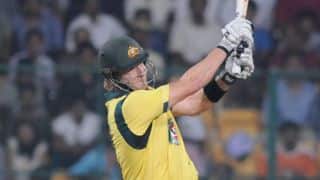 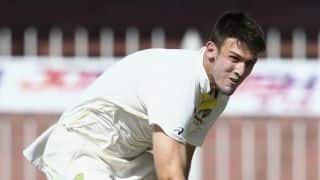