Both captains agree spin will be a big factor in the first Test at Dubai.

Skippers Michael Clarke and Misbah-ul Haq on Tuesday agreed spin will play a major role in the first of two Tests between Australia and Pakistan starting in Dubai from Wednesday.

Australia have practiced on a specially prepared spin pitch at Brisbane in the lead up and hired world record Sri Lankan spinner Muttiah Muralitharan to learn how to bowl and play spin. Despite ace spinner Saeed Ajmal being suspended due to an illegal bowling action, Pakistan will rely on uncapped leg-spinner Yasir Shah and left-armer Zulfiqar Babar to expose Australia on a Dubai stadium pitch, known for taking spin from the outset.

Australian captain Clarke agreed spin will be in focus. “I think spin will definitely play a major role in this series. How you bowl it, how you face it and I think that’s probably the plan for Pakistan,” Clarke said on Tuesday.

“I think they’ll rely heavily on reverse swing and their spin bowling, and we will need to do the same,” said Clarke, who hinted Australia could also play both Nathan Lyon and Steve O’Keefe in the match. “It’s definitely a possibility. I don’t know what the eleven is yet but I certainly think it’s a huge possibility on the wicket I saw yesterday.”

Clarke, who has recovered from a hamstring injury sustained on the tour of Zimbabwe two months ago, admitted he lacked match practice. “I wouldn’t say lack of form. The last time I played I made 68 not out, that was in a one-day series against Zimbabwe. The time before that I got a golden duck, the time before that I got 161 not out. So in my last three bats I think I’m doing okay.”

Clarke missed out on big scores in the four-day game against Pakistan ‘A’, managing just ten and five in the 153-run defeat in Sharjah. If Australia win the series 2-0, the second starting in Abu Dhabi from October 30, they will regain the number one rankings in Tests.

But Clarke denied it was on his mind.  “I don’t think that’s our focus. Our focus is playing really good consistent cricket. We certainly know we have to continue to perform away from home. The great teams that I’ve seen and been lucky enough to play with, they seem to have consistency at home and away.”

Misbah, also under pressure to score runs after managing just 67 in the 2-0 defeat in Sri Lanka in August, said spinners must exploit Australia’s frailties. “Everybody knows that,” said Misbah when asked of Australia’s weakness.

“But they have already proven that in the one-days they can be a really tough side so you cannot say that their record is poor so we can just go through them, you have to really play well, fight hard against them,” said Misbah.

Sri Lankan spinner Rangana Herath took 22 wickets in the two-match series against Pakistan. “I think we have worked a lot on how to play spin, it’s not out of our minds and everyone knows that spin will play a major part in this series, especially in Dubai.” 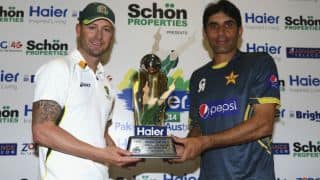