Haddin mentioned that he had gone back out to 'keep because Warner would have to open the innings.

According the the official website of Cricket Australia (CA), Haddin said, “I think I’ll be fine to bat, I don’t think there’ll be a drama. It’ll be uncomfortable but I think I’ll be fine. I haven’t gone for a scan. As you guys know, scans only rule you out, not in. I know enough about not going for a scan.”

Despite his confidence at being able to bat, Haddin mentioned that he was unsure about keeping wickets for the rest of the match. “I don’t know, I would only be speculating. It’s pretty fresh now, so time will tell,” said Haddin.

Haddin mentioned that he had gone back out to ‘keep keeping in mind that Warner would have to open the innings as well. “I had to also think of Davey [David Warner] opening the batting. I didn’t want him to have to keep the whole time and then have to come in to bat. I wanted to see how I’d go and basically make sure he had the best preparation he could to open the batting. That was a big part of the reason why I went back out. I didn’t want him to have to do it and then come in and bat a day and a half.”

However, once back on the field, his discomfort was quite apparent. Haddin remarked, “It was like mice getting tested wasn’t it, with the buzzer. Yeah, it hurt.” On Warner’s wicketkeeping, Haddin said, “I didn’t see much to be perfectly honest. I’ve seen him keep in a practice game. He’s a good athlete. Keepers are all athletes so he gets a tick there.” 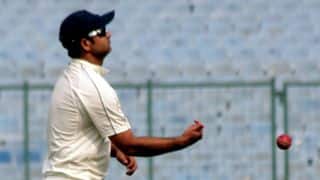