Australia will hope all-rounder Marsh will be able to fill in for the experienced Watson.

Pakistan hope to end a 20-year drought against Australia when they meet in the first of two Tests in Dubai from Wednesday but they are hobbled by the absence of spin king Saeed Ajmal.

Ajmal, who has been suspended due to an illegal bowling action, has single-handedly ruled the dry and slow tracks of Pakistan’s neutral venues in the United Arab Emirates, especially at Dubai where he has 37 wickets in six Tests, three of which Pakistan won. That includes 24 wickets in a 3-0 rout of England in 2012.

Pakistan have also lost frontline seamers Junaid Khan and Wahab Riaz — both through knee injuries — and have to rely on uncapped leg-spinner Yasir Shah and two-Test left-armer Zulfiqar Babar, both of whom are likely to play.

Captain Misbah-ul Haq, under pressure to score runs after managing nought and 15 in the preceding 3-0 one-day series defeat, admitted Ajmal’s absence is significant.” Ajmal has left a big hole,” said Misbah, who skippers a team whose last Test series win over Australia was back in 1994. “But we have youngsters who should grab the chance and I am confident they can.”

The return of veteran batsman Younis Khan and Azhar Ali will boost Pakistan’s fragile batting as they seek to remain unbeaten in a Test series in the UAE since they were forced to decamp in 2009 due to security fears in their country.

Australia will also look to include both spinners in Nathan Lyon and Steve O’Keefe despite their unimpressive record of losing five of the last six Tests (one draw) in which they played with two spinners. But they have dominated Pakistan, winning 13 out of the last 14 Tests against them.

Australia will hope skipper Michael Clarke, top Test run getter in 2013 with 1,093, anchors the batting after recovering from a hamstring injury sustained two months ago. Clarke failed to get much-needed practice in the 153-run defeat in the four-day tour game against Pakistan ‘A’ on Sunday, managing just ten and five.

Clarke admitted Ajmal will be missed by Pakistan. “I think there is no doubt that Ajmal is an amazing bowler. I think obviously Pakistan wish they had him available for selection,” said Clarke. “I have always said that Pakistan have always had a lot of talent in any form of the game and I am sure the Test eleven that they put on the field is very talented and know these conditions.”

Australia will hope all-rounder Mitchell Marsh, who has recovered from a hamstring injury, will be able to fill in for the more experienced Shane Watson who is out of the tour due to a calf injury. Australia’s pace attack will be led by Mitchell Johnson who bowled with venom in the two one-dayers he played — taking six wickets — and supported by the hard-working Peter Siddle. A 2-0 cleansweep would return Australia to the top of the Test rankings. The second Test will be played in Abu Dhabi from October 30. 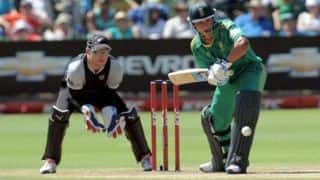 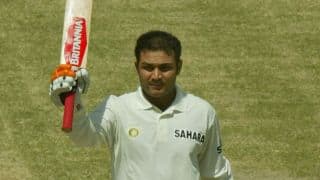