Haddin suffered the injury after Younis Khan edged a ball off Peter Siddle to Haddin but the ball fell short of him.

Australia‘s opening batsman, David Warner has come out to keep wickets for Australia as Brad Haddin has walked out of the ground due to a shoulder injury. Pakistan are curently 332 for three after 97 overs of the first innings of the second Test on Day 2 at Abu Dhabi.

Haddin suffered the injury after Younis Khan edged a ball off Peter Siddle to keeper. Haddin dived to his right but fell on his shoulders on the process and ended up injurying himself. Although he managed to continue for a couple of overs using a pain-killer, but wasn’t able to continue and walked-off the field forcing Warner to keep the wickets.

Warner’s last role as the wicket-keeper for Australia was way back in 2010 during the Hong-Kong sixes. He also missed a stumping chance today for Younis Khan off spinner, Nathan Lyon just agter an over he came in. However, he manged to dismiss Azhar Ali for 109 off Mitchell Starc in caught-behind process. 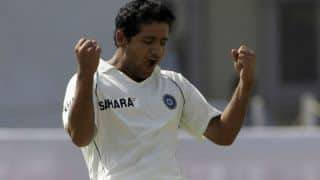