Medium-pacer Mitchell Marsh is all set to miss the ODIs against Pakistan after suffering an injury.

George Bailey, Australia‘s interim skipper has expressed his happiness over the availability of Mitchell Johnson, who is fit to play in the One-Day Internationals (ODIs) after recovering from a fractured rib due to which he was out of action for the past few weeks.

Johnson was uncertain for the ODI series against Pakistan scheduled to get underway from October 7 in Sharjah. However, Bailey validated that the left-arm pacer was performing well in the nets after undergoing a successful rehabilitation and taking proper rest, reports Cricket365.

“He’s been training, building up his loads. He should be good to go. He’s nice to have. He adds something that little bit different. The beauty of Mitch is that he does something very few people in the world do,” Bailey said.

“It’s a real strike weapon for us. He can get something out of a wicket that no one else can. In many respects that’s when he’s at his best. He can change a game quickly. He can get you back into a game quickly. I think particularly in these conditions he will be very valuable,” he added.

However, medium-pacer Mitchell Marsh is all set to miss the ODIs against Pakistan after suffering an injury in the recently-concluded Champions League T20 (CLT20) 2014. He was listed as a possible replacement for the injured all-rounder, Shane Watson.

“There’s a Test spot sitting there waiting for him, so I know that will be the focus to get him right for that. I can’t imagine that he’ll be risked for ODIs unless he’s 100 per cent ready to go. So there’s probably that one spot up for grabs at the moment.” told Bailey on being asked about Marsh. 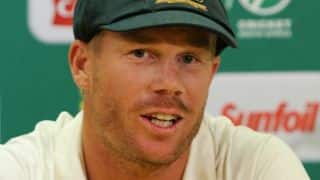