Johnson said his team will go for another win in the final one-day in Abu Dhabi.

Fiery paceman Mitchell Johnson on Saturday said he was happy to be the aggressor in his team’s attack which contributed successfully in the one-day series win over Pakistan in United Arab Emirates.

The 32-year-old left-armer bowled with venom and guile to take six wickets in the two games, 3-24 in the 93-run win in Sharjah and 3-40 in a five-wicket win in Dubai which gave Australia a 2-0 unbeatable lead in the three-match series.

He recovered in time from a rib injury sustained on the tour of Zimbabwe in August and will also be the spearhead for Australia’s attack in the two Test series against Pakistan which follows the one-day internationals.

Johnson, who took 37 wickets in Australia’s remarkable Ashes turn-around of a 5-0 bashing of England last year, said he is gaining more confidence. “I am there to be the aggressor and still try and bowl and hit the wicket hard and bowl those bouncers as well,” said Johnson. “I am just getting my confidence back and things are going the way I wanted to go at the moment, the rhythm and speed is pretty good.”

It was Johnson who helped Australia stage a comeback after Pakistan put on a 126-run opening stand on Friday, dismissing Sarfraz Ahmed (65), Umar Akmal (five) and Shahid Afridi (two) to trigger a middle-order collapse which saw Pakistan derailing from 126-1 to 215 all out.

“On these wickets things don’t change, we had to give fuller deliveries and we got fuller there after and once we started to put them under real pressure we got a few quick wickets and the game changed a bit,” said Johnson of Pakistan’s innings in the second one-day match.

Johnson said his team will go for another win in the final one-day in Abu Dhabi on Sunday. “We want to win three nil and that is our goal now. We have won the series and that is the way we are and we want to keep going and keep playing good cricket because we’ve got the World Cup coming next year and so we have to keep being at our best,” said the paceman. 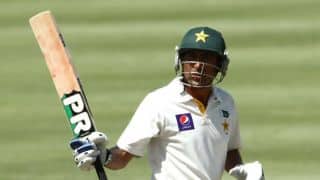 Pakistan vs Australia 2014: Younis Khan could be included in Tests despite outburst