They lost only one wicket in the seesion as Azhar Ali was dismissed for a brilliant 109.

Pakistan are well on course of a good first innings as they cruised to 405 for the loss of three wickets against Australia at lunch on the second day of the second and final Test being held at Abu Dhabi. They lost only one wicket in the session as Azhar Ali was dismissed for a brilliant 109.

Pakistan began the day on a good note without taking any undue risks and just played sensibly to get accustomed to the tough and early morning conditions. Australian bowlers too bowled a good line and length. However, Aussies had a couple of chances gone missing in the form of Younis Khan who resulted in being dropped at point by David Warner. Younis’s outside edge to keeper Brad Haddin, was a setback for the Kangaroos as Haddin ended up injurying his right shoulder on the dive and as a result wlaked out of the ground, being unable to continue due to pain.

This led Warner to come-in as a stand-in keeper who last wore his gloves back in 2010 during the Hong-Kong super-sixes tournament. He initially also missed a stumping chance of Younis but was able to get rid of Azhar who handed a simple catch off Peter Siddle ending his brilliant innings of 109 off 250 balls. The dismissal led to the arrival of skipper Misbah ul Haq started off briliiantly with a six and a boundary. He scored fluently, ultimately reching his half-century just before the lunch, while Younis remains unbeaten on 141. 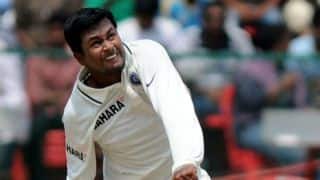