Waqar also remarked on the poor run of his wicketkeeper-batsman, Akmal.

Waqar Younis, Pakistan‘s head-coach bewailed his sides awful batting performance after they managed only 96 for 90 in 20 overs in the sole T20 against Australia in UAE that kept him contemplating on the team’s chances of lasting for 50 overs in the ODIs.

The Australian spinners did a great job as Glenn Maxwell claimed three wickets, whereas only three batsmen from Pakistan reached double figures with the top score being Umar Akmal‘s 25. According to reports in cricket365, Waqar said, “Batting, we didn’t really put enough runs on the board. Losing early wickets, it was not easy after that. And full credit to the Australians, they bowled well, they bowled to the plan and they came out good. I think there was nothing wrong with the pitch, it just spun a little more than usual. The major focus for us is how are we going to deal with 50 overs? We have to make sure that we bat 50 overs. It was disappointing what happened today,” said Waqar.

He also remarked on the poor run of his wicketkeeper-batsman, Akmal, whose 25  was also his highest score in his last six innings. “That’s not only a worrying sign for U but for us also. We have to really sit down and think hard about his batting, and his wicket-keeping also. We speak about his talent. He hasn’t really delivered. We have to really speak to him and maybe try different things with him.”

Meanwhile Maxwell seemed to be content with the victory as he was quoted saying, “That’s what we were aiming to do tonight, to really put our front foot forward and basically put a dent in Pakistan and make it harder for them to come back for the rest of the time we’re here. To start a series like that where it’s a really dominating win with six overs left is a great way to start a tour.” Pakistan vs Australia 2014: Both teams to focus on spin ahead of ODIs 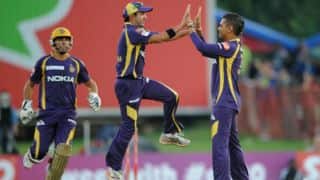