"The feeling is very nice, it's an honour and I feel proud to become the first Pakistani to score against all countries."

Veteran batsman Younis Khan on Wednesday said he was proud to become the first Pakistani to score a hundred against all nine Test opponents and equalling the record of most hundreds for his country. The 36-year-old scored a brilliant 106 to help Pakistan recover from a precarious seven for two to 219 for four at close on the opening day of the Test at Dubai stadium.

This was Younis’s first hunded against Australia, making him the first Pakistani and 12th batsmen overall to score a hundred against all Test opponents. It was his 25th Test hundred, equalling Pakistan’s record held by Inzamam-ul Haq.

Younis said he felt nice about achieving the honour. “The feeling is very nice, it’s an honour and I feel proud to become the first Pakistani to score against all countries,” said Younis after the match.

Younis scored a brilliant 177 against Sri Lanka in August, a point where he started to chase the rare honour.  “It was never in my mind before but when I scored a hundred in Sri Lanka it came on my mind, when I equalled [Mohammad] Yousuf’s record of 24 then it came to my mind that I have no hundreds against Australia and then equalling the great Inzamam’s record, its even a bigger honour to be equal with him,” said Younis.

Dropped for the preceding 3-0 one-day defeat against Australia, Younis said it has not always been easy during his career.  “It has never been easy for me throughout my career,” said Younis, who made his debut in 2000. “Things keep going against me but all the time I play for my country and whenever my team needs me I go there and play positive cricket with positive body language and it was in my mind that if I do something here I will be a proud Pakistani,” said Younis, who believed a 400-plus total would help Pakistan. “I think 400 plus would be vey nice but its not going to be easy and as a unit the Australians are very tough,” said Younis.

Paceman Mitchell Johnson, Australia’s best bowler with 3-22, praised Younis. “We toiled really well and used the conditions really well. The two early breakthroughs and we tied it up throughout the game but Younis batted really well and really patiently, when he had the opportunity to score,” said Johnson. West Indies cancel tour to India: ICC says it does not have power to intervene 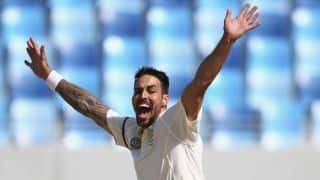